Hank Campbell
Rather than making affordable health care reality, the Affordable Care Act sent costs for many privately-insured people up as much as 700 percent. The federal government allowed insurers to pass through their new losses to everyone else and even with that, many insurers fled states due to the program being insoluble.

Perhaps the solution is not to have people pay 700 percent more, but to force hospitals to be transparent about costs. And that would mean more realistic pricing without a reduction in quality.

When I was a young person, it was common to see 'X needs $10,000 to get an operation' efforts. My thought even then was, why not just ask the doctor to do it for less? They're human beings just like we are. Lawyers do some work pro bono, lots of people work at charities for nothing, why does one segment get to charge full price and be thanked for it? Worse, why if you donate a pint of blood for free will a hospital charge someone $400 and up for it next week?

The issue is that these costs are just made up. If a local store has a frying pan for $80 and I look at the same pan on Amazon and it is $20, I am buying Amazon. The federal government forbids that in health insurance. I can buy Blue Cross of California but not Blue Cross of Pennsylvania for less. Giving customers choices would stop the wild swings in costs that make medical tourism appealing.

A new RAND paper tries to argue the opposite, using virtual estimates. They claim that improving price transparency and increasing competition won't work as well as government increasing costs even more by adding another layer of bureaucracy.

This defies economic logic. And history. 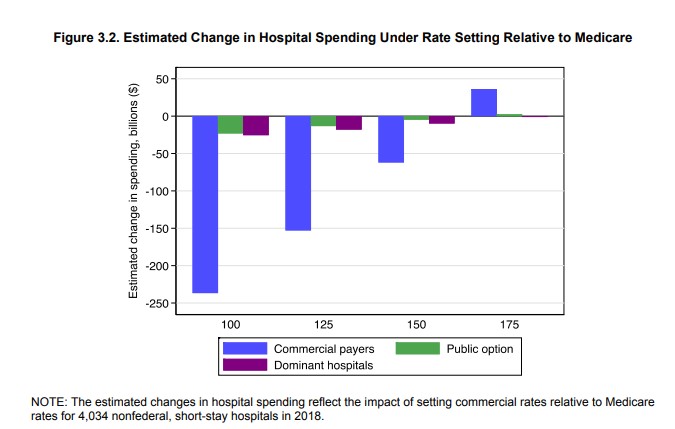 Are you gullible enough to believe the energy company is buying energy from you at the same price they are selling it because labor and infrastructure are free, rather than they rich people are exploiting the poor for subsidies? Then you will love this RAND paper claiming that if we force all health care costs to Medicare, rather than creating competition, costs will go down and quality won't.

AT&T insisted to politicians they needed to charge $1 a minute for long distance phone service in the 1980s, and cable companies claim to the government they need similar monopolies and price controls today. Airlines once insisted they had to charge (in today's money) $3000 or planes would not be safe. Planes are instead safer than ever and phone calls are free because of competition and price transparency that allows people to shop around. And if cable companies and health care were not controlled by government, those would be both less costly and better than ever as well.

Letting government set prices is bad most of the time. Now, no one contends it is always bad. Food and energy are strategic resources, so we should not hand over control of those to competitors who may become enemies, which would happen if we didn't subsidize them. But when it comes to health care, the evidence that higher cost is consistently better is not there. A study instead found that, even after controlling for differences in patients and regions, the surgery cost for congenital heart defects in kids varied by up to 900 percent. Yet there was no quality difference.

The authors behind the new paper guess that government control would save from $6.2 billion to $68.9 billion, a range so non-specific and broad - an entire order of magnitude - it is meaningless. And it defies real-world experience. When has government control of an industry reduced spending?

In the real world, outside optimistic simulations, the most politically well-connected hospitals will set the prices for all in a government control scheme. That means prices will go up, not down, while quality and availability will not improve. Transparency and competition remain key, not regulating deregulation. Deregulation in airlines and phone calls worked because it was real, while deregulation in energy and cable service have not worked because government controlled it, which meant entrenched monopolies and political darlings were able to block out everyone else. Today, cars are nearly twice as expensive as they were in the 1960s while a trip by air is 10 percent of the cost then; and that is entirely thanks to real competition, not government fiat.
Science 2.0
More Articles All Articles
About