Hank Campbell
A new process uses harmless viruses that eat bacteria to form microscopic beads that can safely be applied to food and other materials to rid them of harmful pathogens such as E. coli. Though tiny, each bead is about one third the width of human hair, they have millions of bacteriophages.

Phages sound simple, proteins wrapped around a genome, which makes them customizable. To-date, though, they are also too unstable to gain traction in the corporate world, where consistency matters. These new sprayable disinfectants are food-safe and effective and don't have the stability issue. As is often the case, though, their challenge now will not be scientific. In the 1940s, antibiotics made from penicillin became common so research into phage disinfectants and therapies declined. Yet with no one wanting to pay for new antibiotics to be worth the development cost, bureaucratic red tape, and inevitable lawsuits, phage research may be worthwhile again. 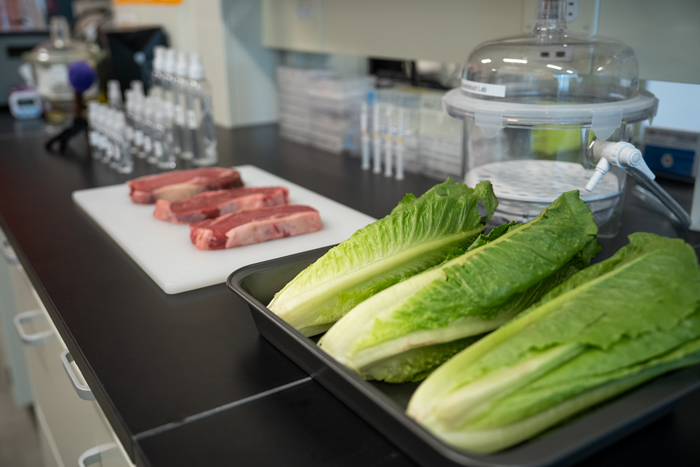 The new spray is a good first step because phages, like organic food pesticides, are so old they have been 'grandfathered' into approval by the US Food and Drug Administration. The benefit is that they are like a hydrogel but harmful only to bacteria, and they can be tuned for specific types. When they reach their target, they multiply and therefore increase their antimicrobial power. Because they can be 'tuned' to take out harmful strains of bacteria, they won't kill bacteria that enhance the taste, smell and texture of food.

There are still beyond challenges the regulatory environment. The demographic with the highest wealth and can afford expensive new products are most likely to distrust science when it comes to food, so the inventors will have to hope that natural disinfectant positioning overrides the granola foodie distaste for science, a pitfall that the alternative meat market has not been able to avoid.
Science 2.0
More Articles All Articles
About