Screening For Prostate Cancer At Embryogenesis And California Trees As Carcinogens
By Hank Campbell | October 30th 2018 11:07 AM | Print | E-mail

Hank Campbell
In California, we have warning labels on trees, because they will give us cancer. And that is not even the strangest of California's warnings about nearly 1,000 chemicals on hundreds of thousands of products.

In America's most populated state, the actual government does little legislation that isn't easily predictable along party lines - one party controls both houses and the Governor's mansion. The hard decisions are by Proposition, directly decided by up to 19 million registered voters. (1)

Propositions have become popular for Political Action Committees in California because they can't be overruled by the legislature - they are a super-law. Everyone in California (and most of America) has heard of Prop 65, which requires warning labels on any product that has been statistically correlated to cancer. Some of the correlation, like that eating bacon is as hazardous to your health as inhaling cigarettes and asbestos, are ridiculous but the government cannot do anything about it.(2) So California cancer patients visiting oncology wards in California hospitals cannot walk around without some common useful product notifying them it will give them even more cancer.

This is from an actual California oncology ward, the one place where patients already have cancer and where doctors and scientists know more about cancer than the statisticians at International Agency for Research on Cancer (IARC) can ever hope to learn. Obviously the person who took it wishes to remain anonymous, lest the pitchforks and torches come out.

Coffee, toast, tea, you name it and a trial lawyer, along with a paid expert witness like Chris Portier of Environmental Defense Fund (EDF) or Martyn Smith of Council for Education and Research on Toxics (CERT), is trying to sue their way into a new yacht.

But it isn't just in cancer wards that everyone has to warn people about cancer lest they get a bill from a trial lawyer; even nature is under assault.The husband of Dr. Layla Katiraee went shopping for a tree to plant in California. Big mistake. He got told by government he is risking cancer by engaging in conservation. 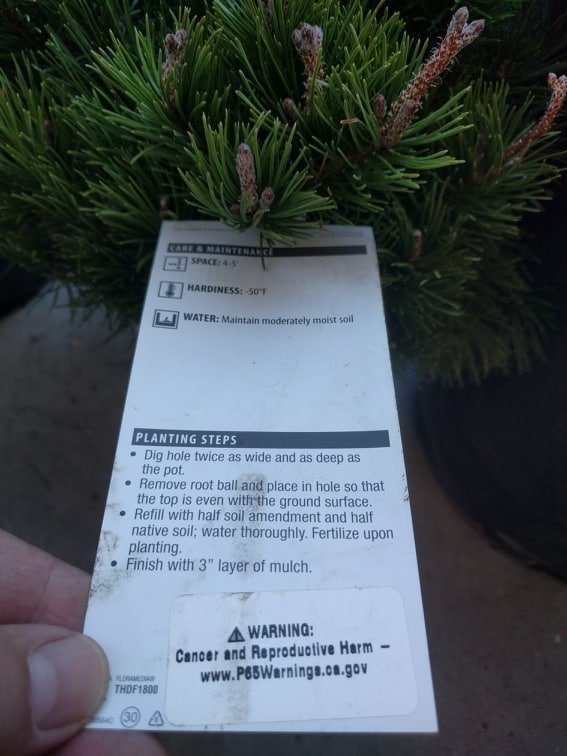 Yes, in California trees will give you cancer. Source.

You may be wondering if it is not the tree at all, perhaps it is the label, or the ink on the label, or the carbon dioxide in the air, which will be far higher in a greenhouse - well, no one knows or cares at this point, it's all the same risk fatigue in California. In the 16th century, every illiterate peasant knew the dose makes the poison - if they went to a tavern and the beer was diluted with a whole lot of water, they knew they were being ripped off - even before Paracelsus phrased it so succinctly. (3) Today, activists supporting homeopathy and endocrine disrupting chemicals basically don't even realize that if you put more or less lemon in lemonade it changes the final result - and a whole lot of wealthy people on the coasts of California believe it either helps or harms you even if you can't taste the lemon at all. (4)

Clearly most Americans are not wealthy elites on the coast, the 99 percent have more common sense and less money to spend on frivolous nonsense like supplements and food labels that make them feel like better human beings, but we are all overrun with scary chemical narratives, and there is comfort in the "precautionary principle" - better safe than sorry.

But how safe is really worthwhile? Are you willing to lower the speed limit to 5 miles per hour to prevent traffic deaths? Should we start screening for prostate cancer at embryogenesis?

That is an exaggeration but it is the same logic as throttling progress back to placate the lowest scared denominator in culture, those who know the least about science and medicine but yell loudly. It's fine to choose an intellectual placebo, like organic food or a "natural" chemical if you have the wealth, yay capitalism, but confusing or shaming poor people who can't afford it is not just bad ethics, it is being a terrible human being.

Yet intellectual placebos, and forcing poor people to pay more lest companies be sued, is exactly what the lawyers at Center for Food Safety are promoting with Proposition 12. In California, they want poor people to be forced to pay more money so that some food animals have slightly different living space. These are animals being raised for slaughter yet Center for Food Safety and its PAC friends are pretending that allowing slightly more space - with graphic images of abuse, as if that is the norm in agriculture - is going to be a better result for the animals. Center for Food Safety is a fan because they are in the "sue and settle" business and if Proposition 12 is passed they can shake down companies or prearrange a settlement with a politically sympathetic court in California whose costs would be borne by consumers.

They are wealthy lawyers, they know it will lead to higher costs for the poor. They even concede that businesses who do not comply with the tens of millions of dollars in increased costs will have an unfair competitive advantage, and that is why they want to add another layer of penalties on companies.

Even PETA is against this ridiculous proposition, as are farmers and government groups that see higher food costs - and tens of millions of dollars per year in new state union employees for "enforcement" - as the only outcome. But Proposition 2, which this augments and which went into effect in 2015, already showed what happens when increased regulation for no benefit occurs; by 2016 eggs produced in California dropped 35 percent while prices rose 33 percent per dozen.

Out-of-state farmers won, and lawyers won, while California consumers and farmers lost. That is not leadership, but Texas continues to applaud California policies. While California will lose a seat in Congress in the next election, Texas will probably gain 3, and many of them are people who fled the state because we think trees cause cancer.

(1) Just the eligible voters in California outnumber the total population of America's bottom 15 states so it seems strange that the legislature does little except find new ways to show how much they care about micromanaging the lives of citizens. Propositions have some second order benefit. Once California's ruling majority got voting laws changed so there need not even be two parties on a ballot, whoever gets the most primary votes will run in the election, meaning for Senate seats it will be Democrat versus Democrat, voter enthusiasm plummeted. Propositions are the only way that Republicans and Independents have any voice.

(2) It would require another proposition to get rid of it or change it to something meaningful and coastal Californians don't even accept vaccines, they sure are not going to accept a change to a law that protects them from warning labels on bacon.

(3) Sola dosis facit venenum - "Only the dose makes the poison"

(4) We like to think that science acceptance is a problem of people with less education but it's often just the opposite - less educated, poor, religious Mississippi has almost 100 percent vaccination while California had to use the force of government to mandate that supposedly educated people in Marin vaccinate their children - I wrote about one school there had almost 80 percent of children unvaccinated.