Stanford SS Is Hosting Vandana Shiva Today - And The Science Community Should Be Angry
By Hank Campbell | January 23rd 2020 08:28 AM | Print | E-mail

Hank Campbell
Would any school with a medical program be happy about a paid talk by Robert F. Kennedy Jr. so he could rail against vaccines, claiming that a world of preventable diseases made humanity stronger by culling the weak? Would doctors be happy if a school organization devoted to fighting climate change helped fund it?

That is why the science community at Stanford, one of the best science schools in the country, should be outraged that the Students for a Sustainable Stanford group, and the Woods Institute climate change think tank, has paid around $40,000 for an anti-science philosopher, Vandana Shiva, Ph.D., to talk about "sustainability" - when everything she advocates now made the world less sustainable in the past. 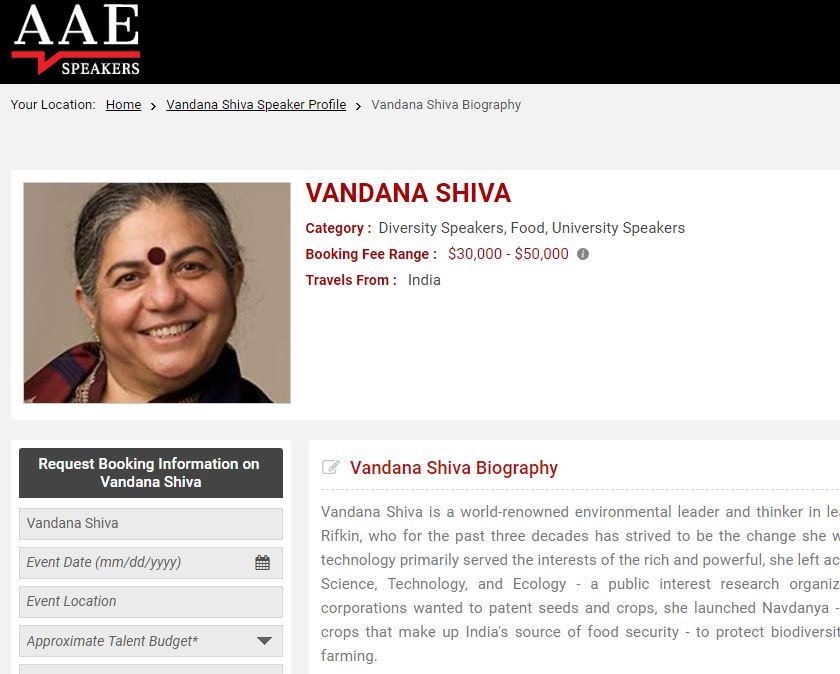 Climate scientists may be thinking biology and agriculture is not "their issue" but when the science consensus is disregarded in one area by other scientists, it undermines public trust in all areas. Why trust scientists on global warming or vaccines when groups in those fields fund denial in areas they have no expertise in?

Dr. Shiva opposes science that doesn't fit her doomsday narrative. All of it. 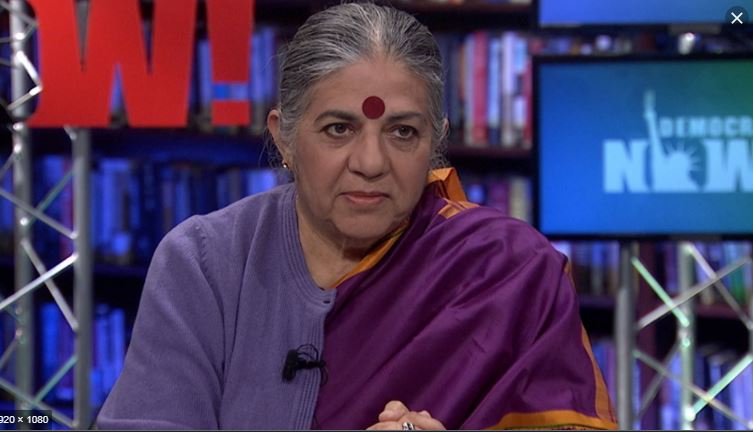 Philosopher Vandana Shiva, Ph.D. Image: Democracy Now, a fringe political site that routinely features deniers for hire opposed to science. In her appearance she railed against "the 1%" and since no journalists work there no one asked her how many times a year she collects that $40,000 speaking fee and how long she has been part of that 1%.

The Students for a Sustainable Stanford(SSS initiative) co-sponsoring her talk is housed at Stanford's Haas Center, which is the brainchild of Standford President Don Kennedy, who promoted its creation to give students a university platform for civic engagement. Before becoming Stanford head in 1980, Professor Kennedy had been Chair of their Department of Biology, he had run FDA, he has a biology Ph.D., and was editor-in-chief of Science magazine. Obviously he is pro-science.

Would he be happy that the Haas group he was behind creating is wrapping themselves in the flag of sustainability while undermining food security here and in developing nations? Of course not.  Yet today he would probably be cast out of the building because of his acceptance of biology.

I wrote him for comment but due to health issues he is unavailable. So I asked on social media if any Stanford scientists wanted to comment and ... nothing. Had I done a poll on cilantro versus coriander or what they feel about Donald Trump, perhaps the response would have been better but when it comes to a polarizing anti-science activist, all you hear is crickets.

One undergraduate science student, Maxwell Meyer, wrote a fine recap of Shiva's Greatest Hits in Stanford Review, but the silence from the broader Stanford community is notable.

It may be that they don't want students picketing their homes, email bombing their department heads, threatening them, calling them sexual predators on Twitter, or any of the other things anti-science activists have done as recently as this week.

Maybe many of them believe Shiva for other reasons. Science is unfailingly political due to government increases in funding, and therefore control, since the 1980s, so unlike the period prior to that, academia is now overwhelmingly one-sided when it comes to politics. Only handicapped people have less representation in academia than Republicans today. Though California finally stood up to the anti-vaccine movement, overwhelmingly situated among Democrats on the coast, they haven't similarly embraced the consensus on GMOs.

They should, because the alternative to science is people like Shiva, famous for writing things like "Plants also have integrity . We need to move from an patriarchal ,anthropocentric worldview to one based on #EarthDemocracy". Her supporters, including women, defended her when she trivialized rape - a very serious yet common problem for women in her country - to create a misguided analogy, rationalizing that "organic farmers lose control of reproductive rights when GMO invades".

That whole coastal area is a hotbed of anti-science rhetoric and overt denial, and the reason may be that some science comes down along political lines.  Few Democrats deny climate change but when 55 members of Congress tried to get warning labels on GMOs, 53 of them were Democrats. The only Republicans on their side were people with large fishing constituents, they didn't want GMO fish being grown in other places more sustainably. The 53 Democrats were also representing their constituents, and their constituents are against food science.

In California, arguably the nation's most anti-science state despite world-class science schools, it was only when Democratic State Senator Dr. Richard Pan, working with support from us and other groups, got a law passed to prevent arbitrary vaccine refusal for kids did preventable infectious diseases finally begin to decline on the west coast - where Democrats are almost 80 percent of the voters. He literally had to shame his own tribe into standing up for healthy children. We had to promote a grassroots campaign to pressure Gov. Gavin Newsom, who is courting wealthy coastal elites for a 2024 Presidential campaign and very much did not want to stand up to them, to sign that bill. Though anti-vaccine and alternative medicine and anti-GMO beliefs have always been the same group (any visit to a Whole Foods book section showed you that) only vaccine denial got enough national media attention for California to be shamed.

Agriculture has not had similar success in California yet, even though food production alone is 400 different crops and $50 billion in revenue for the state - 10 percent of its GDP. Just before CBS This Morning featured an Ohio doctor who defended vaccines and was viciously harassed, CBS Los Angeles featured Zen Honeycutt, someone with no scientific or medical credentials who is anti-GMO and anti-vaccine.

Not only does the Stanford science community not protest Shiva's hate speech against farmers and scientists, with her claims that agriculture is rape and fertilizers are Weapons of Mass Destruction, they are funding it. Stanford Woods Institute for the Environment - "Stanford University’s hub for faculty for environmental studies" - is a sponsor. They are literally paying her to undermine science they know little about and then wonder why more people don't trust climate science. 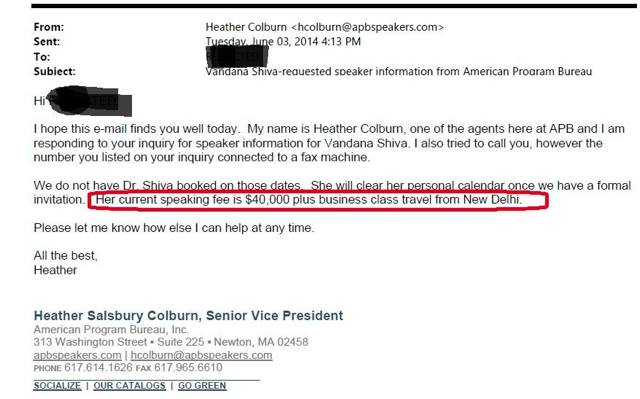 UC San Francisco also routinely collaborates with organic industry trade reps like locally-based U.S. Right To Know (the organic industry knows its demographic) to use student and federal grant money attack the science community. Berkeley is no better, Professor Tyrone Hayes is paid to scare children about science by Pesticide Action Network. It is only when you drive 70 miles inland, to Davis, California, that you have any hope of finding a majority of pro-science academics when it comes to agriculture.

Common sense pushed into the coast when it came to vaccines, we should do the same for food.

For that to happen, the climate change community should stop embracing conspiracy nuts about other areas. Co-sponsor Woods Institute is a climate change think tank. Would they be happy if biologists brought in a global warming denier who spits on the science consensus? If a student group tried, you can be sure the Stanford climate science community would protest. When it comes to agriculture, they are instead paying to be part of the problem.
Science 2.0
More Articles All Articles
About