It may seem like olden days to millennials, but the late 1970s were a lot like today. America was divided due to an unpopular President, gas was expensive, the movie industry was at death's door ... and genetic engineering was a big concern.

GMOs were a worry 40 years ago? Didn't they just come out in the 1990s? The answer is 'yes' to both. The legal term "GMO" was due to a patent in the 1990s, but before then the first commercial genetically modified organism was insulin for diabetics. If you are not familiar with insulin, it's a hormone produced by the pancreas that regulates blood sugar levels. Insulin removes that blood sugar. Without it, diabetics suffer numerous long-term complications.

Diabetes was once an early death sentence but in the 1920s scientists discovered they could use beef pancreases to get insulin and literally inject it into patients. A better way to create it made perfect sense as a goal of science and it seems to the modern world that everyone would have agreed. But they didn't. America's most prominent activists, along with a towering figure in the Democratic party, were opposed.

Though GMO insulin today is regarded as a gigantic success story for public health, in 1977, the same political forces and activists aligned against science now were already against it then. Just the names have changed. Today, it is Senator Bernie Sanders, back then it was Senator Ted Kennedy. Today, activists universally call all genetic engineering a GMO, but back then the public knew a broader term, Recombinant DNA - which is what a GMO is, the transfer of genetic material from one organism to another plant or animal.

Some of the states against science then, like Massachusetts and California and New York, are the same today, though they have gotten a new addition in Vermont while Pennsylvania has switched to the pro-science camp.

In 1975, Senator Kennedy called for hearings to tightly regulate recombinant DNA research, and he wanted any federally-funded scientist who did not agree to lose their NIH grant. Any other scientist would be fined $10,000 per day. The mayor of Cambridge banned what Kennedy called high-risk research from being done at Harvard and MIT, unless the scientists installed two sets of self-closing doors, sealed seams in the floors, walls, and ceilings and installed a ventilation system like is used in labs working with tuberculosis, SARS and West Nile virus. Just to work with E. coli that couldn't spread through the air anyway.

Super-activist Jeremy Rifkin organized protests against biologists, with his followers singing, "We shall not be cloned" as a way to place themselves in the moral camp of the civil rights movement of the previous decade. Then, as now, they didn't actually know any science or they would have known recombinant DNA is not cloning any more than Frankenstein was a GMO.

Scientists persevered, voluntarily making sure everything was done safely due to fears Kennedy and the Carter administration would manipulate the legal system to shut them down. They came to a consensus on using specific bacteria (e-coli strain K12) genetically engineered so that even if they somehow got to the outside world, they would die quickly and have no chance to colonize the human digestive tract.

By 1982, we got the first high-profile breakthrough for recombinant DNA research. A GMO insulin product was ready and Eli Lilly&Co. submitted NDA 18-790 for Biosynthetic Human Insulin (BHI) - Humulin. Though many FDA scientists were unsure why they were considering it a New Molecular Entity, since the amino acid sequence of Humulin occurs naturally in humans, they still took the conservative approach. It was quickly approved. No more chopped up pork and beef pancreases, E. Coli and yeast cells, with the help of the gene for human insulin production, were suddenly tiny insulin factories. Insulin is now cheap.

But all of that extra caution created a bigger problem we have now. Because scientists were so worried about Kennedy or others shutting them down in the 1970s, proactively taking steps to prevent problems that might not even be scientifically possible, and they publicized their efforts to assure the public that recombinant DNA research was not opening up a new world of biological problems, activists began to promote the belief that scientists were being so cautious because their research was risky. They began to raise money on the idea that science was placing us all in imminent danger and only a big check to an environmental group would save us. Because even something that FDA scientists said was not a New Molecular Entity was treated as such by FDA, activists, including those who have wormed their way into FDA now, insist all new science must be regarded as such even though it's clearly not.

That is the legacy they have left us. Two generations of activists have convinced a giant swath of Americans and the politicians that represent them that science "must be proven 100 percent safe" before it can be on the market - a test no product can withstand. One popular anti-science documentary features a guy who won't let his kids stand in a field of corn without a haz-mat suit. Center for Science in the Public Interest, Center for Food Safety, Sourcewatch, Organic Consumers Association, Consumer Reports, Dr. Oz, they all parrot that belief to their followers for financial gain. 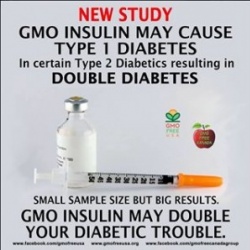 Yet the success of GMO insulin shows there is no reason to give up hope. Culture changes and the 1970s ended in many ways, literal and metaphorical. In 1980, that unpopular President was swept out of office after one term, then gas became affordable again and genetic engineering has led to such a boom in food that no one in America is worried about starvation like we were in the 1970s. Instead, we are worried that Americans are becoming too fat. Diabetes, once a death-sentence, is now the archetype for what managed disease looks like.

Forty years from now, we may regard the controversy over GMOs and Gene Drives and RNAi and whatever else activists try to scare us about as being just as quaint and naive as Rifkin and Michael Jacobson and Ralph Nader were about recombinant DNA and insulin. But the next generation of activists will continue to sell fear and doubt about science, so we will continue to provide evidence and sane guidance. I look forward to writing about all of those victories in 2057.