Hank Campbell
A new study says that drying a load of laundry in a machine releases "microfibers" into the air but chemicals made by a $76 billion company will save us.

Microfibers? Is that a thing? Sure, we have defined healthy down to such an extent that no one is without a disease of some kind. With endocrine disrupting chemicals, small micron particulate matter, and supermarket food it is amazing any of us live more than a day.

But is it really meaningful? As with Micronauts, it sounds like something that might be the science equivalent of an MCU show but on closer examination is really more like Hasbro latching onto a fad. 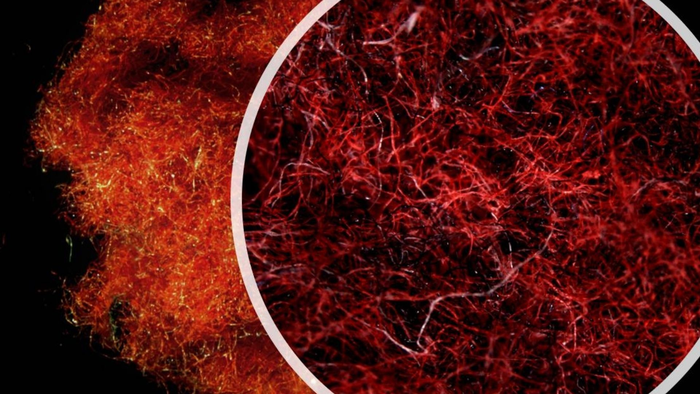 'Sell the sizzle, not the steak' remains true. In this case, use bright red clothes in the dryer and show the lint in a press release article about microfibers but don't mention THESE ARE NOT MICROFIBERS - they are 100X the size of microfibers. Air pollution epidemiologists do the same thing when they show maps of Beijing air when talking about PM1.0 and PM2.5 and leave out that Beijing are is PM10. The excuse is just what the rationalization is here. The larger 'contains' the smaller. That is the essence of homeopathy and voodoo as well. Credit: P&G

Some of it just makes no sense, Microfibers are by most considered plastic from something like polyester but this says the microfibers most released are cotton. Microfibers are defined as 1/10th of a "tex" - about 1/100th a human hair - but their image shows regular dryer lint easily visible to the eye. The paper suggests there are 1,000,000 tons of it being released through lint screens in dryers.

They call it both air pollution and ocean pollution despite doing no studies to find it in either.

Definitions are confused but all you want to know is if these microfibers are harmful. In a world where homeopathy is a billion dollar business and California claims it is saving lives by putting out maps of small micron particulate matter (PM2.5) as a reason to add more costs to gas and cars for poor people, some will believe that the dose no longer makes the poison and that 'any dose is poison', which means someone in a school somewhere will use terms like "potentially harmful" about it - in this case to promote fabric softeners and dryer sheets sold by companies like Proctor&Gamble, who supported the work done by the scholars at Northumbria Univeristy.

In order to make the leap from bizarre homeopathic conspiracy theory to potential killer you can always be helped by a few things: the word "potential", which is non-specific so you can never be wrong, as is "harmful", and in combination they can't really be refuted, since water is potentially harmful; phrases like "growing body of evidence" are always good to support the concern you want to create, because that means even one paper, including if you wrote the other paper; finally, the word "suggests", because it only means you have correlated something to something, even better if you can throw in the meaningless statistically significant.(1) If any journalist sees through it you can always back off and say they were not claiming "causal" - but from IARC to the US National Institute of Environmental Health Sciences, causation is exactly what they want the public to believe about their epidemiology claims.

Read about how to manufacture a science claim in When It Comes To Neonics, Activists Understand PR Better Than Chemical Companies Do

So here is an example of how it can work: 'A growing body of evidence finds that drying laundry could release as much as a million tons of microfibers annually and suggest that they could increase risk to the environment and potentially also human health.'

There you go. Now all you have to do is put it in a press release and hope a New York Times journalist gets enthusiastic in their pitch to the editor and they will promote it on Tuesday, side-by-side with those recurring articles about acupuncture. The winner; Proctor  &  Gamble, the work suggests that their dryer sheets - chemicals plus landfill pollution - and fabric softeners - chemicals - are healthier for aquatic life than invisible cotton microfibers.

The numbers don't really make much sense. Only 18 million tons of actual clothes even go into landfills each year, but they suggest these tiny particles from drying clothes before that are still so high they could mean potential risks to sealife. Then they make the leap from drying clothes - without dryer sheets, anyway - to risking human health.

How? Well, everyone has heard of asbestos by now.  Like the word cancer, people freak out when they see the word asbestos. We know it's bad, there are still lawyers on TV hoping to find someone with mesothelioma they can link to it, so if invisible particles are as bad as that let's mandate and subsidize fabric softener the way we do solar power.

The problem is these microfibers are not asbestos any more than puffing a pipe once a week is the same as smoking two packs of cigarettes per day. Asbestos is 10 µm in diameter, these microfibers are much larger, and even if they were the same size a potential hazard is much different than risk, the way drinking 10,000 shots of scotch is not the same as drinking one(2), even though the hazard from the alcohol is the same in both doses. Cotton has been in use for about 8,000 years and it has been washed and dried the entire time.

Are we to believe that before the invention of Bounce dryer sheets people were getting lung cancer due to microfibers? Where are the bodies?

They don't exist, the same way no lives have been saved in the 25 years since we have been saddling people with PM2.5 regulations - which means future epidemiologists endorsing dryer sheers will need to move on to next approach; fabricating 'years added' to lives.

(2) Five orders of magnitude, 1 is the same dose as 10,000, is why the International Agency for Research on Cancer (IARC) has been so plagued with controversy in recent years. Beginning in 2009 they began to block out any experts who had ever consulted for "industry" - which means the very best - and that left only consultants for activist groups and second-tier academics. That was intentional and it led to their desired effect; everything from weedkillers to bacon was "linked" to cancer using obscene dose animal studies and bad epidemiology based on suspect food frequency questionnaires.
Science 2.0
More Articles All Articles
About