Hank Campbell
What is old hype is new again, which is to say population bombs, starvation in Africa, nuclear plant meltdowns, and atomic destruction because an aggressive American president makes a wholesome dictator in Russia nervous and nuclear bombs start going off.

1) Hysterical activist with a credible title engages in crisis inflation
2) It gets New York Times coverage and a whole bunch of other people talk about it
3) A few questionable academics jump on the bandwagon
4) Serious scientists debunk it, to little public acclaim
5) The original scientists back off
6) All the old critics die off
7) A new generation of activists claim it was not a myth

That is where we are at with nuclear winter, catastrophic global cooling which never was more than speculation by Dr. Richard Turco and his friends but caught fire thanks to Carl Sagan of "Cosmos" fame wanting it to be true. Turco later said he never believed that it would be that bad, it was Sagan who hyped it as co-author of ''Nuclear Winter: Global Consequences of Multiple Nuclear Explosions.'' Written with Dr. Owen Brian Toon and Dr. James B. Pollack of NASA Ames Research, along with Dr. Thomas P. Ackerman of Penn State, it was manna from heaven for environmental groups and other doomsday prophets. Stopping nuclear energy was the fundraising rage then and activist scientists and journalists had common cause with them then just as they do now - and they succeeded in putting a halt to it in America, which led to more coal use (now they can protest the global warming they caused.)

Though nuclear winter during the Reagan years took pop culture by storm the science community was dismissive - penchant for hype is a key reason why Sagan never got admitted into the National Academies of Science - and a few years later the authors did what they could to retract it without sounding stupid. In ''Climate and Smoke: An Appraisal of Nuclear Winter,'' they took the teeth out of the monster they had created, to little acclaim as you would expect.

26.000 atomic bombs would do very bad things, it wouldn't be a drop in temperature that would cause this.

But young scholars impressed by the power of a scientific claim to terrify the public are now of an age where they get to do the same thing.  And we once again have a president Democrats can't figure out how to beat and who makes other countries nervous. So it is only fitting that nuclear winter is back in a new video game-type simulation published in Journal of Geophysical Research: Atmospheres, an in-house publication of the American Geophysical Union(1)

They try to resurrect the lich of nuclear winter by noting there are still a lot of nuclear weapons out there and noting that if they all went off at the same time that would be a bad thing. It would, but humanity would not die out because of the colder temperature, such claims are hype just like that even fewer fires in the Amazon are ruining Earth's oxygen supply when the fires are overwhelmingly happening on farms. Their secret sauce input Whole Atmosphere Community Climate Model may claim devastating global cooling but they only rehash the assumptions of other hysterical claims, they don't do anything to make their case better than we got from media hype in 1984.

Their model claimz 150 million tons of soot will cause all of America to be below freezing, that's right, a drop of 50 degrees. Since there is an equivalent myth that we only have enough food in cities to last for 3 days (2) all of American and Russia would die but most of the planet would be in peril as well. All 7 billion people would be on the verge of mass extinction.

I can play "Frostpunk" and or "Metro Redux" and get as much science as that.

Nonetheless, publications like Treehugger latched onto it. Food journalist Melissa Breyer (who claims she did "duck and cover" drills in schools, a complete fabrication unless she is 60 years old or was in that one school that still did it one time by 1980) dredges up all the old narratives in a bit of 'I want to live in important times' wishful thinking. 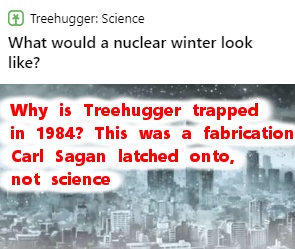 This is not the first attempt to resurrect it. A few years ago, the New York Times, which made nuclear winter part of cultural hysteria, attempted to reframe it as part of their global warming discussion.

But like wholesome environmentalism of the past, nuclear winter is just science fiction nostalgia. Back then, activists could hire Fenton Communications to promote whatever nonsense they invented and get it on "60 Minutes" or in the New York Times. That is far more difficult today. Thanks to groups like Fenton and corporate media, the public don't trust journalists the way they once did. The New York Times has journalists defending anti-vaccine groups, why trust them on any science?

Despite the 'we want to live in important times and have things to protest' posturing, where we need to cancel culture Dave Chappelle and manufacture endocrine disruption scares about trace chemicals, the reality is that impending doom is no more valid today than nuclear winter is. Putin is not Khrushchev and President Obama's own Director of National Intelligence exposed how Russians are helping American environmental groups undermine American farming and energy. They don't need nukes to tear us down, they have the organic food industry.

And we're living longer better than ever. When once poor people could only afford meat once a month, America's poorest people can now afford to be fat and live in more square footage than the middle class in France. We are producing affordable energy while causing emissions to plummet so low that by 2017 our energy emissions were below what the never-enacted Clean Power Plan would have mandated by 2025.

When basic needs are being met at low cost, people can think about intangibles. For some that will mean more libraries and museums and better literacy, for others it will mean more dread and belief in the supernatural. We know where nuclear winter fear lands.

(1) Which has been geared toward political hype for so long they once put an English major who wrote a book criticizing Republicans on their Board of Directors without letting any members vote on it.

(2) Along with it takes 150 liters to make a cup of coffee and a gallon of gas to make a pound of beef, also press release claims that got national attention thanks to PR firms getting them into the hands of politically allied media editors and producers. All of which were then debunked but still get trotted out.
Science 2.0
More Articles All Articles
About