Hank Campbell
Wealthy elites from Manhattan have been retreating to their vacation homes while year-round residents wish they would stay away. Urban residents are being treated look poor refugees during pandemics, famine, and war. They will bring the problem with them, it is believed.

While it may seem like an odd stance for progressive elites in the northeast to take about their fellow man, it is likely the first time that these issues were anything except academic to them. And they are not wrong for believing that people from cities are more likely to be carriers. 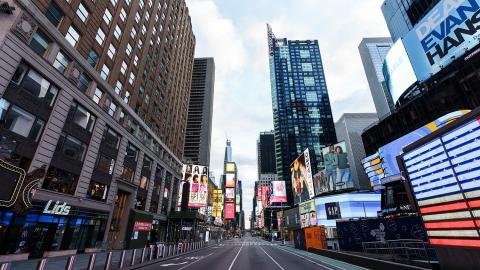 A new preprint finds that COVID-19 grew roughly 2.5 times faster in the New York metropolitan area (~20 million people) than in Oak Harbor, Washington (about 84,000). This makes some sense. When President Trump created travel restrictions from China January 31st, New York, which along with California has long positioned themselves as the opposition to anything Republicans do, declared him racist and went on as usual, which caused them to get it from Europe.(2)

Once in America it spread faster in cities. Anyone looking at pictures from Central Park over the last few weeks can see people are social distancing together, which defeats the purpose.  And that's not just anecdotal. The new results used county-level data to distill city-level results from March 13th to the 24th in 200 metropolitan areas and found that such disregard for recommended behavior - the Mayor of New York City told residents to rush to go to bars because he was going to be told to close them - had disastrous effect. The New York area had roughly 50 percent growth per day during that time while Seattle, which has a direct conduit to China much like California, took it far more seriously and only had 15 percent.

Cities are far better able to handle it, of course. America had 160,000 ventilators even at the beginning of March and most of those are in cities. But larger cities are also less politically diverse so they are going to spend more time trying to blame the opposing political party while smaller cities get on with getting back to normal.

(1) There are exceptions. While New York Governor Andrew Cuomo is doing his best to look presidential, infectious disease experts remember a few short years ago that his administration had them come up with a rationing plan for medical care because he wanted to spend money subsidizing a solar panel plant for a wealthy Democratic donor, not buy the 16,000 ventilators they requested. And New City Mayor Bill de Blasio has shown how unqualified he is to lead anything except a campaign for someone who knows what to do during a crisis. When the city was suffering blackouts he was off on a Quixotic presidential campaign no one in his own party had asked him to enter and he looks even more helpless now that a real crisis is in his city.

(2) Europe is now blaming WHO, the World Health Organisation, for not sounding the alarm back when Trump did. Half of Brazil's cases came from Italy in the five weeks after the U.S. reduced travel and Italy would have self-isolated earlier if WHO had not suggested travel restrictions were xenophobic. Genetic network analysis shows the infection spread from Wuhan to Europe and then to America.