Hank Campbell
If you are still being paid and your job is so secure you can go on strike to demand that your employer not ask you to come into the office, you might think getting a vaccine is not only no big deal, but is a moral mandate more important than any other. You can dismiss people who are less enthusiastic(1) as vaccine deniers or something even worse for journalists and 94 percent of science academics; Republicans.

Vaccine hesitancy is overblown by media and therefore science media on Twitter. As Dr. Thomas R. Frieden, former director of the CDC, told the New York Times, “Hesitancy makes a better story because you’ve got controversy.”

It's not an accurate story. Some people don't mean to be hesitant, they don't even think they are. That does not mean they have the vaccine yet nor does it mean they won't get it. For some, the fear of missing work if they have symptoms after the second shot, or of even taking time off of work to get the first one, is daunting.

It also may be inconvenient, expensive, and intimidating to get there.(2) 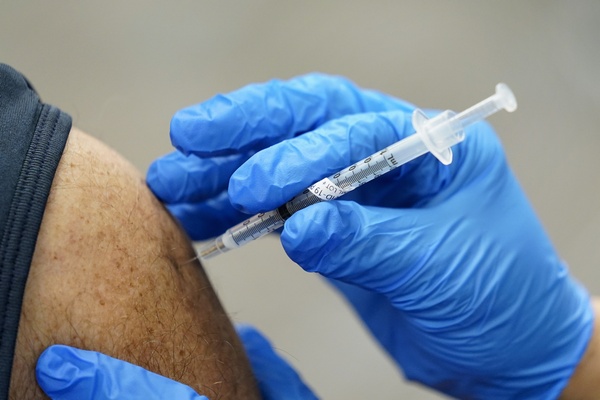 In California, a university touted how it was holding a vaccine clinic for underprivileged people. What was more privileged than having a vaccine site for urban people at a suburban university? Would white professors take a bus to go to an inner city vaccine clinic? There are recurring media reports of minority people being harassed and even shot but university employees can't understand how people of color might not want to risk coming to their campus.

What worked instead was having the vaccine clinic in the parking lot of a predominantly black church.

A new paper uses surveys to try get answers and maybe make political points - it says among other things that Latinos here illegally don't want to risk being sent home (yet somehow they were easily able to survey them) but the real reasons are more nuanced. Surveys are not behavior.(3) They are terrifically unreliable. If you ask someone if they got a vaccine, most are either on alert due to guilt or defiant.  Most people answer hot-button questions with an answer they think you want to hear, a defiant answer, or the excuse they can remember.

When 'they are afraid of big government' doesn't work, the report points to economic disparity as the culprit. There is more validity in that. If you need to work, and you are in a job where you can't get paid if you don't, you are at risk.

Survey rich celebrities to find out what would happen if their gardener did not show up and still expected to be paid and we'll know how much risk laborers face.

1. An online process that does not take my aeronautical engineer wife to figure out for people who can easily block out time in advance and then an in-person process for those who get time opened up.

2. Why is so much paperwork needed? The vaccine is supposedly free so why do people have to provide proof of health insurance to get it? The reason is government regulations. It can't be the most important civic duty we have when voting requires less documentation so fix it.

3. Fewer checkpoints. When I got my first and second shot I had four separate checkpoints to go through. The actual shot took 45 seconds but the process took 45 minutes after driving nearly that long to get there. That's over 2 hours round trip - a big chunk of time when you work hourly.

4. Put the clinics where people live, not where it makes people working at the clinic feel good. The university example above was the kind of tone deaf way elites make themselves feel good - we're helping minorities! - without really helping at all.

You don't need to pay people not to work to get the vaccine - California is discovering that is a bad idea - you just need to help them miss less of it.

(1) I have been fully vaccinated for a while, as has my family, but I founded a science non-profit so I would be. My kids were also vaccinated when San Francisco and other coastal California residents had so many vaccine deniers they outnumbered the rest of the United States -combined.

What changed? Distrust in government certainly got amplified. Should people suddenly trust the government on drug approval when the FDA created a regulatory labyrinth and insisted it took 10 years and a billion dollars for medicines to be safe? Why trust the government when they just said the same industry that produced this vaccine created an opioid epidemic in collusion with doctors now recommending we get vaccines, and media piled on? Why trust the CDC when they were being so incompetent they had to be ordered by the president to send out coronavirus tests - and then sent faulty reagents, making the tests useless?

Pharmaceutical scientists didn't pull off a miracle nor has safety been ignored, government got out of the way. The same pace of discovery we see in cellphones and televisions was being choked into submission by politics in drug development. Yes, some people were harmed by Vioxx decades ago, does that mean changing a font on a drug label needs 18 months and millions of dollars to get approval? That is the government regulatory climate we had before 2020.

(2) In California, where I live, last month the government sent out a press release claiming everyone could get vaccinated. My health insurance company, Kaiser Permanente, later sent out an email saying that they had no vaccines and that they would let us all know. I dutifully filled out the government form to get notified when it would be available while my wife asked around her friends. She then got us an appointment. A few days before I was scheduled to get the second shot Kaiser sent me an email telling me I could now get an appointment for the first one. California followed later. The same government people of color are told not to trust by media outlets is also so caught up in its own bureaucracy it can't be trusted even by me. That does not inspire confidence it's smart to miss work.

(3) This was evident in the anti-vaccine movement long before 2021. Progressive academics desperate to prevent their political party from being called anti-vaccine would trot out surveys showing just as many right-wing people as left- claimed to be anti-vaccine, but they ignored reality. Schools on the California coast, populations almost all on the left, had vaccine rates for kids under 30 percent. They didn't admit being anti-vaccine on surveys, Jenny McCarthy claimed she was not anti-vaccine, they instead reframe it as being pro-choice or wanting more testing.

(4) In California, activists say coronavirus has shown the weakness of the free market, because there is both runaway unemployment and lots of jobs going unfilled. Businesses need to raise hourly wages and the government should raise the minimum wage, they argue.

Just the opposite. California passed a law that says no one can be evicted. For lower income people, nearly half of their earnings go toward the rent or mortgage. If they get unemployment payments and don't have to pay rent, they don't need to work. Government created a problem that people ignoring that say the free market must fix.
Science 2.0
More Articles All Articles
About