Many assume that trans-phobia, homophobia, and racism are exclusive to certain age groups and absent in other age groups.  This week I considered the controversial term “Trap” used in the art of translating anime, Japanese cartoons, into English language and western culture.  In doing so I found apart of the anime fan culture which is comprised of broadly millennial age (late teens, 20’s and 30’s) people who are in many ways more transphobic than Archie Bunker, and in others more PC than Rachel Maddow. 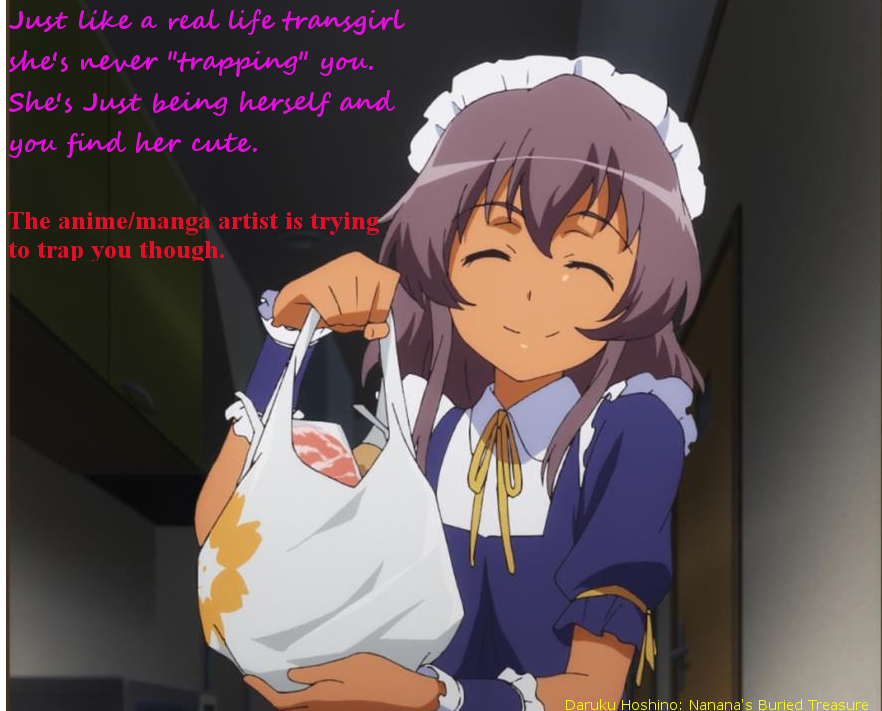 A multimedia presentation on this subject is embedded below.  You can scroll down and listen to my narration.  (Above a picture illustrating the meme among the transgender community.  Daruku Hoshino from Nanana's Buried Treasure.)

The important thing to take away from all of this is summed up in the image I created to represent a meme in the transgender community that we are not “trapping” anyone.  All we are ever doing is being ourselves.   In the case of a drawn painted character, the motive of those characters is never to trick, trap or deceive….BUT the anime/Manga artist might have that motive. This seems like a small distinction, but it is an important one to keep in mind for one reason.

The real-life sentiment that lead to “trap” being used to describe finding out a character was male-to-female transgender has had real consequences. In real life transwomen around the world are sometimes killed with the excuse being that they have deceived a man into having sex with them.  This narrative of deception is also used to justify things like bathroom laws, and other discriminatory measures against transgender people.

It is important to note that the term used in Japanese itself… Otoko no ko does not mean “trap” literally translated it means “male daughter” and is used by everyone from cross dressers to full post op transsexuals there.   Even this anime Nanana’s Buried treasure took the time to try and clarify just who the character Daruku Hoshino is and isn’t.    Using the problematic word to direct people towards the actual Japanese meaning.   Characters like Daruku are not boys ..but something else.

To look deeper into this I decided to look at the online community known as Know Your Meme.   So I created a thread.  The first response was….

“A trap is a feminine male who can fool people into thinking he’s a woman, they’re not necessarily trans, i.e. they’re not taking hormones and mutilating their bodies to look like women, it’s just how they naturally are. It makes sense that this thing has such a name.”

Yeah… no transphobia there.

The second response wasmuch longer but more or less agreed with the first.

“And by the way. “Traps” and “Trans” are very easily identified apart from eachother. Trans identifies themselves as woman, most of the traps are not because it comes with the territory of being a classic trap (those character identifies as a assigned gender from birth). Traps put on the classic makeup and are very skillful at it and on the outer appearance alone looks like perfect, most trans on the other hand are still very identifiable by looks alone. ”

Then they try to argue that the concept is older than anim egoing back to Kubuki etc and predating transgender ism…. Ugh.   There are records,and archaeological finds of people like us going back to at least the Neolithic era.

Rather than rehash my refutation of all that, I created a power point for a colleague’sclass and gave a speech.  I created a version with narration for posting toKnow Your Meme and, so I post that version here. It contains scholarlyreferences for all the facts presented in it and in this blog post.

(Correction, in the power point above, which is write protected and can't be changed even by me I made a factual error.  It seems 25 US deaths is the number this year and supposedly that's an all time high... I could've sworn that it has been much higher.  Either way for a small group 25 is a lot).

Apparently that is a thing that can happen in 2017.  I Was Recently Informed I’m Not a Transsexual by Riki Wilchins June 7th 2017 2017 in the Advocate. Riki is a female to male transsexual.  I am not the first to be told that it transgender is the same as transsexual and any other gender variant person isn’t now.  His remarks on what political correctness has become are spot on.

BUT “Are Traps Gay?”

YES! As representations of transgender people these anime characters would in terms of internet bro slang be gay.  As such calling these characters “traps”is transphobic and homophobic and should not be done lightly.    Much as most transgender folks will say that using words like … “tranny” and “Shemale” are ok in the context of things like pornography in a similar restricted context “trap”can be used.  You can see my answer and justification in the power point.   The situations that these characters are put into could also be called “traps” … if anything the characters themselves… are bait!

That context is anime conventions and referring to specific situations that the transgender character is put into .  Anime conventions because there exist a whole set of people who go dressed up as “traps” some of them identify that way at those conventions. As for people dressed as such at anime conventions they might be gay you’d have to ask them how they self identify.      Yes, some of those people are also transgender in the rest of their lives.

If I were to go to a anime convention dressed up like Daruku Hoshino* and get angry if called a trap that would make me a jerk.  Why,because I know that this term of art, problematic as it is, is used in that context.  I also know that for that group of people it is correct.

Likewise if someone saw me on the way to the convention in or out of costume and called me a trap they would be a jerk because that’s at least an impolite term to address a person with.   That is a hateful and fearful way to refer to a person 99.95% of the time that we are just in real life.

Lastly someone who is not any kind of an anime fan, and not versed in the culture, and who will never ever go to a convention, or discuss it online should not try to tell those who do how they can speak and/or write about it.  To do so is nothing but an act of power and privilege over a sphere you are not apart of.

My adventure in the land of the anime trap fan has shown me that transphobia is alive and well among many millennial age people.   However,they are all honestly trying not to be offensive.   The best advice I can give for that is to avoid possible offence by not using words that anyone considers derogatory towards anyone if possible. 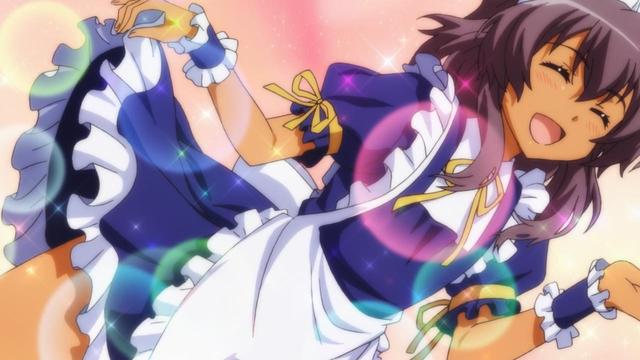 I really wonder if whoever drew the art for this anime has some level of gender issue... because they really captured the ... feeling of freedom  that unlocks an inner happiness  and external comfort for transsexuals.  This picture says it way better than my words.

*I am one of those people who feels that someone who cosplays ought to look like the character to some degree.  Daruku is me drawn as an animated character more than Disney’s Pocahontas is.  Since most all characters are either Asian or Caucasian and the few African/African American characters are manly men I couldn ever seriously consider cosplay…in my own opinion.  Now I someone like me has a representative.

All media used is property of the respective copyrightholders and I claim fair use of the media for primarily educational purposes.