Also, GPE is composed by 3 units of U++, U--, and U-+ when negative and positive energy exists, U-+ (GPE between negative mass and positive mass) has positive values and is the component that makes repulsive gravitational effect. U-+ corresponds with the inner energy of the system and can be interpreted as dark energy.

Also, situations in which U-+ has much higher value than |U-- + U++| depending on the distribution of negative mass and positive mass is possible.

This discovery implies that our belief that size of gravity and size of components of the universe would always 1:1 correspond was wrong.

** Simulation Program
To look into the characteristic of GPE, we used the simulation program named Gravitation3D made by Roice Nelson.

b)Finding mean value
Through Gravitation3D program, 1000 particle pairs (total 2000ea particles) were produced by random and one mean value (GPE) of each distance value was found 5 times each.

B. Results of simulation
http://www.youtube.com/watch?v=GUpiH3jsCnA 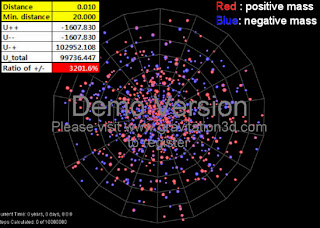 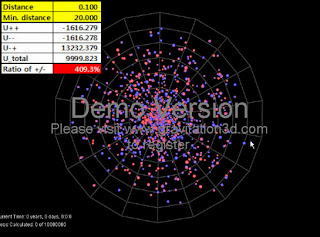 We will describe that an unknown repulsive energy U-+ higher that attraction of visible matter exists for the energy value of above.

C. Accelerating expansion of the universe

As R, which corresponds to the radius of the universe, increases, absolute values of GPE all decrease while the total GPE is mostly maintained.

This "increase of dark energy" doesn't come from a newly generated space, but shows feature of GPE which is made by negative mass and positive mass.

...........
H.Results of simulation
1) Even though negative and positive mass have the same size, total GPE can have +, 0, - values depending on the placement of each.
2) U-+ value is higher as d0 is smaller and the total GPE also have a high positive value.
3) Looking into the numerical calculation of B)-1)-B)-4), it can be seen that positive gravitational potential value U-+ can have much higher values than negative gravitational potential values(138% - 3,201%). If we consider the distance of Planck length level, this value can have very high values enough to explain inflation.
From the observation result of WMAP, we know that dark energy value, which generates repulsion, is 2.58 times the total of matter and dark matter. Until now, it is predicted that dark matter produces attraction. Closely look into numbers B)-3).

5) The above results show that 72.1% of dark energy doesn't exist independently, but implies that there is possibility that negative energy having the same size of positive energy can emerge.

6)This "increase of dark energy" doesn't come from a newly generated space, but shows feature of GPE which is made by negative mass and positive mass.

No one has seen dark energy or dark matter. We must remember that we only recognize it through gravitational effect.