By Emilie Lorditch, Inside Science

(Inside Science) – From a tree's exquisitely textured trunk, up to its diverging branches and finally, fluttering leaves, it can be easy to see the complex work that lies ahead for the movie artists and computer programmers tasked with recreating the intricacy and beauty of nature. This Saturday, scientists, engineers and artists will celebrate the recent advances in technology that create realistic worlds on screen from imaginary visions.

The Academy of Motion Picture Arts and Sciences will hold its annual Scientific and Technical Achievement awards ceremony on February 7, at the Beverly Hills Hotel, in California. This year, the ceremony will be co-hosted by Margot Robbie, who recently appeared in "The Wolf of Wall Street" and Miles Teller, who starred in "Whiplash." The two will recognize 58 recipients for 21 scientific and technical achievements that have become standards in the film industry. Members of the awards committee and some of the award winners spoke to Inside Science.

"People are passionate about making new art and the advances in science and technology for making films is moving at a breakneck speed," said Doug Robel, co-chair of the Academy's Sci-Tech Awards Digital Imaging Technology Subcommittee and the head of software research and development at Digital Domain a visual effects and digital production company  in Playa Vista, California. "The Academy really recognizes innovation because there are lots of people doing really cool and clever things."

"The creativity in this community is as important as the best actors and directors," said Richard Edlund, chair of the Scientific and Technical Awards Committee and an Academy award-winning visual effects artist for films such as "Star Wars" and "Raiders of the Lost Ark." "Our honorees exemplify the phenomenal creativity of professionals in the scientific and technical community, and the invaluable contributions they make to what is arguably the most creative industry in the world."

In animated films the artists and designers don’t have the luxury of working with things that are already in a scene, such as a palm tree; they must create everything that the audience sees.  “At the time, we were working on the 2001 film ‘Shrek’ and there were no tools to create plants specifically,” said Scott Peterson, head of effects at DreamWorks Animation in Glendale, California. “We created the DreamWorks Animation Foliage System which is a collection of tools that artists use to create trees.” 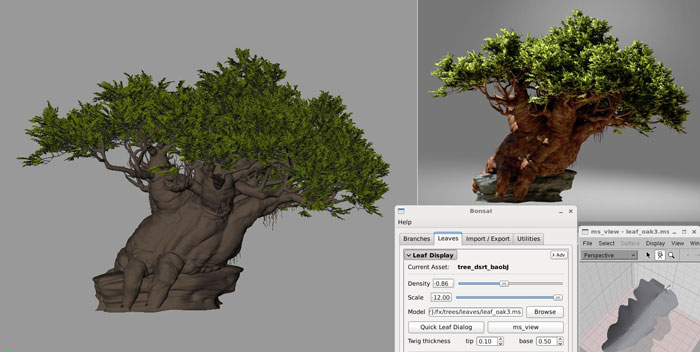 “While making all the broad-leaf tropical plants in "Madagascar" in 2005, we were inspired to put artists in the driver’s seat," said Peterson. "So that they could create trees found in nature and artistically driven stylized trees with thousands of branches."  Peterson explained that the computer-based system sees each individual tree as a network of curves. Gibbs converted that network of curves into a skeleton that computer rendering software recognizes and displays as a tree. Artists would then be able to wrap branches around the tree to create the vision they had in mind.

"You have to be observant of nature; there is an insane amount of complexity in nature and it is daunting to try to represent that in our movies," said Peterson. Sometimes Peterson goes straight to the source for his inspirations. While on a walk with his wife in the redwood forest one day, she noticed a glazed look in his eyes and asked him if he was working. "I was," he said.

While over at Interactive Data Visualization, Inc. based in Lexington, South Carolina, they developed their own system called SpeedTree Cinema, which is a computer software program that lets artists create faster and more precise modeling of trees and plants. The team of computer engineers includes Michael Sechrest, co-founder; Chris King, co-founder and Greg Croft, senior software architect.

According to IDV, in 2009, they were tasked with designing and rendering virtual vegetation for “Avatar.”  Richard Bluff, Industrial Light and Magic digital matte department supervisor, was responsible for matching "Avatar" director James Cameron’s detailed vision of the film's setting, a planet called Pandora.

When Bluff showed Cameron a 23-second-long flyover of Pandora created using SpeedTree Cinema, Cameron's first question was about how they simulated the trees. According to Bluff, Cameron was shocked at how closely the trees matched his imagination.

Compared to crafting the twisted branches of a tree, creating a perfectly coiffed hairstyle involves another set of specialized tools. A group of scientists and engineers at Weta Digital in Wellington, New Zealand developed the Barbershop hair grooming system.

"The system creates a digital representation of hair for a character or creature," said Marco Revelant, a model supervisor. "We made it very user-friendly so the artists can focus on how they want the hair to look."

The system designed by Revelant, Shane Cooper, a senior software developer and Alasdair Coull, head of research and development allows artists work with digital hair on a computer much like a hairdresser would cut and style hair on a live model. The artist is able to work with individual strands of hair and every point along that strand. Another aspect of the system that is unique is the "cloning" feature that allows an artist to replicate a specific feature such a braid on hundreds of digital doubles like in the dwarves in the "Hobbit" films. 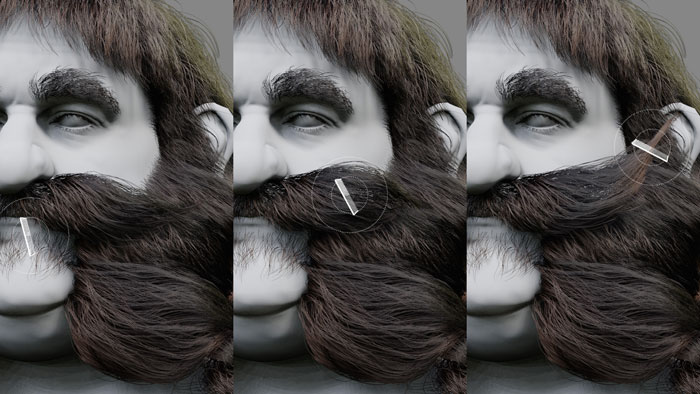 Artists used the "comb" in the Barbershop Hair Grooming System to style mustaches and beards in "The Hobbit" trilogy.

From fur to fir trees, these technologies have forever changed the way movies are made and the expectations of the audiences that watch them.

"I was 14 years old when the original 'Star Wars' movie came out, you have no idea how radical and startling that movie was," said Robel. "In 'Noah,' there is a shot illustrating evolution and it is so unbelievably complicated and so pretty, I've never seen anything like it."

Emilie Lorditch is an editor and writer for Inside Science TV; she tweets @EmilieLorditch. Reprinted with permission from Inside Science, an editorially independent news product of the American Institute of Physics, a nonprofit organization dedicated to advancing, promoting and serving the physical sciences.