Having the book in my possession for just a few hours and having thumbed through it, I am happy to report that, this book lives up to my high expectations and can stand shoulder to shoulder with Zee’s other two Nutshell books. I am not going to review the book here, but I do feel triggered to say a few words on Zee’s Nutshell trilogy in general. Hopefully, for those of you not familiar with Zee’s writing but eager to self-study fundamental physics, this will allow you to decide if these books are right for you. 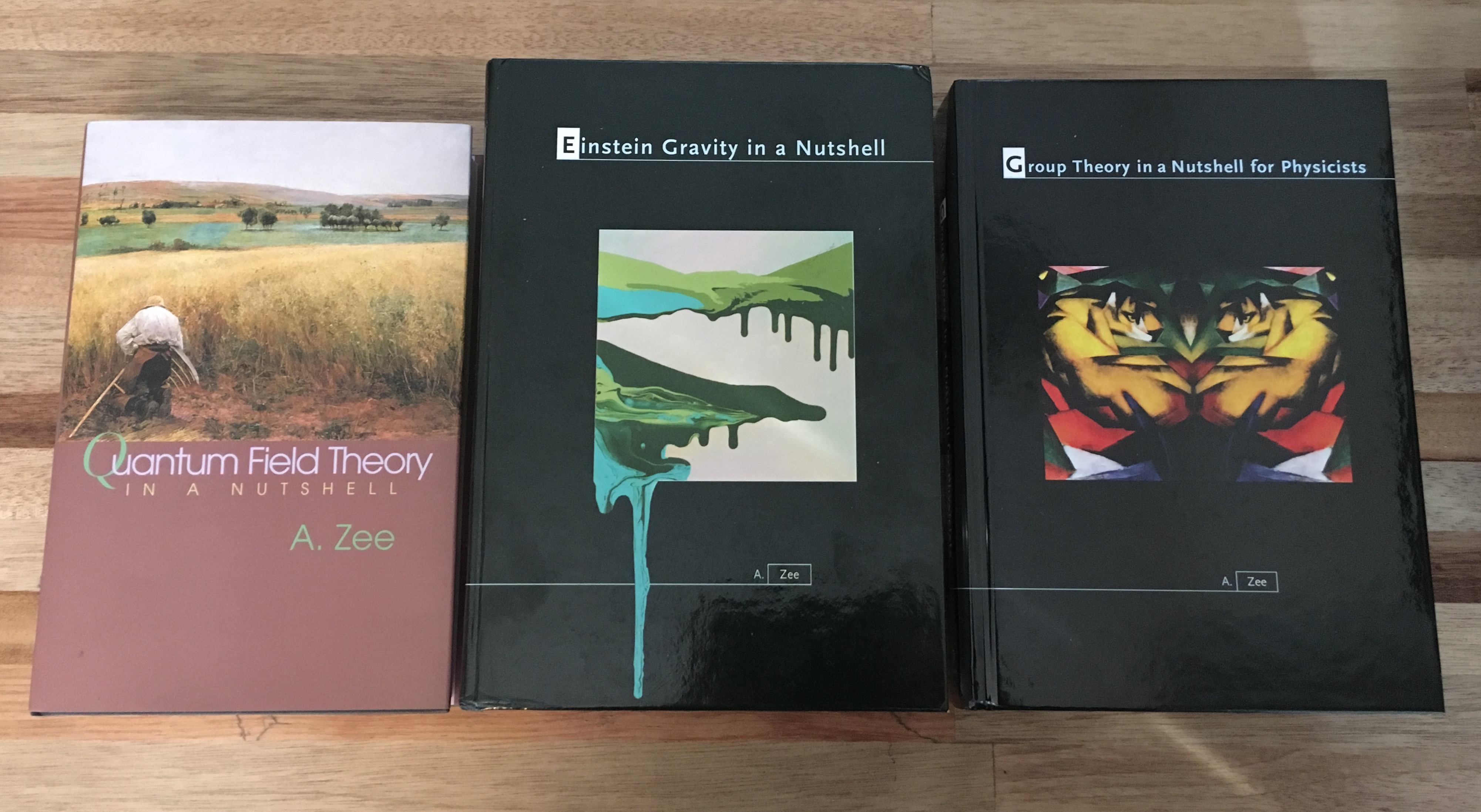 For a start, if not clear already, I plead guilty to being a Zee fanboy. Not only is Zee’s Nutshell trilogy present on my bookshelves, I also own Zee’s popular science writings “An Old Man’s Toy“, and “Fearful Symmetry“. Stretching things a bit, these latter two books can be seen as the popular science versions of book 2 (Einstein Gravity) and book 3 (Group Theory) from the Nutshell trilogy. Stretching a bit more, one could classify Feynman’s “QED“, which contains an introduction by Zee, as the popular science version of Zee’s first Nutshell‘s book (Quantum Field Theory). You can find Zee’s introduction to “QED” at his homepage. This short text provides you with an appetizer for Zee’s writing style: informal, peppered with anecdotes, and rich in lighthearted remarks.

Throughout the Nutshell trilogy, Zee focuses on building physics intuition. If you are looking for strict mathematical rigor and formal derivations: forget about Zee’s Nutshell and look elsewhere. If you are looking for practical advice and eye-opening perspectives that help you build physics intuition on rather abstract subjects, the Nutshell trilogy is probably for you. Having said this: I don’t want to leave you with the impression that anywher in his Nutshell books Zee is sloppy in his math. Rather, I would judge these books as striking a healthy balance between handwaving and mathematical rigor.

The level addressed by Zee is that of an advanced undergraduate to graduate fundamental physics course. In self-study terms I’d say that Zee’s trilogy assumes a solid understanding of The Feynman Lectures in Physics, as well as a firm basis in linear algebra and analysis. From this, the three tomes bring you pretty close to research level. Quite a tall order, and it should not surprise you Zee’s trilogy counts a total of 2000 pages. I suspect that the majority audience for these books is not those whose self-study brings them in first-time contact with the areas studied. Rather it is an audience of readers who studied physics or a related discipline a while ago, but who feel the wish to revisit ‘some of that stuff’ to build a deeper and more up-to-date (and likely better) understanding. This group of readers is well served, as Zee set himself the standard to write the books “I wished I had when I was a student”.