Do we have a nitrogen emergency? Most people aren't aware of the role nitrogen plays in our atmosphere. According to NASA, Nitrogen makes up about 78% of our atmosphere. Despite being so prevalent, we give it relatively little thought. We've spent years worrying about carbon dioxide and its impact on the environment that nitrogen has slipped by relatively unbothered. Yet nitrogen pollution is a significant enough problem to demand attention from the United Nations. The EPA notes that nitrogen pollution is one of the most prevalent and economically severe problems the US faces. With such an issue at hand, how come no one has ever heard of it?

The Benefits of Nitrogen We Take for Granted

Nitrogen is one of those ever-present gases that fill the empty space in the air. Unfortunately, since we don't breathe it, we don't even think twice about it. However, the only reason we can survive on this planet is that there's so much nitrogen. Nitrogen in its natural state of N2 forms a triple-bond between two nitrogen atoms. The bond is extremely stable, making the element chemically unreactive. The amount of N2 in the atmosphere means that there's little chance of a conflagration. Fire needs oxygen, and nitrogen ensures that we don't see massive explosions happening all the time. The issue is that nitrogen is more useful in its reactive form, Nr. Scientists refer to Nr as "fixed" nitrogen, and it forms the basis of how we use it in industry and commercially. 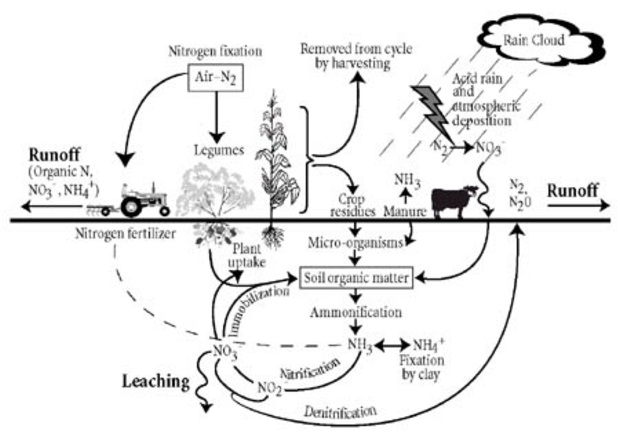 Ammonia (NH3) is the foundation for the basic building blocks for our body's proteins, enzymes, and even DNA itself. Plant growth depends on nitric oxide (NO), ammonium (NH4+), and Nitrate (NO3-). In the past, fixed nitrogen was acquired from guano, the dung of bats and birds. However, around World War I, humanity developed a method for artificially fixing nitrogen, which was later perfected into the Haber-Bosch process. The result was the massive manufacture of fertilizers (and explosives) because of our ability to tap into nitrogen on-demand. Unfortunately, fixing nitrogen tends to harm the environment. Nr pollution has led to severe problems in certain parts of the world. Human action has led to the production of reactive nitrogen that finds its way into our atmosphere. Outside of scientific circles, the problem is primarily unacknowledged and unknown.

What We Know and Don't Know

We're well aware of how humanity cycles nitrogen products. There are detailed descriptions of the nitrogen cycle in high school and college textbooks the world over. Unfortunately, the role of nitrogen in climate change is discussed much less. It's possible to measure the increase in nitrogen oxides (NOx), ammonia, and fine particulate matter (FPM) above affected cities and agricultural sites. We can even measure the impact of NO3 runoff from farming areas and how much it impacts groundwater through leaching. The atmospheric concentrations of nitrous oxide (N2O) are also increasing at an alarming rate that can be measured. What we've discovered is that the nitrogen that we use in food production is highly inefficient. The National Environment Research Council of the UK suggests that as much as 80% of our nitrogen used to grow crops ends up wasted as pollution.

Obviously, since dealing with a problem of this magnitude requires inputs from several areas, it's challenging to link the different approaches together. We have no idea of the cost estimates of Nr pollution because it's hard to find a standard measure of its potency. There's no overarching measurable scale that one can use. Health impacts differ from economic impacts, which vary from environmental impacts. The easiest way to address this problem is to look at Nr and N2 outputs on a measurable scale. Humanity loses around 200 million tonnes of nitrogen to the environment each year. If we estimate the cost at $1 per kg of nitrogen, the losses come up to a staggering $200 billion annually.

Some efforts have been made to solve the problem. However, the results were mixed because of the fragmentary nature of policies. Several sources have suggested that the only way out of this problem is to build a more circular nitrogen cycle. As a result, human inputs of Nr and N2 into the atmosphere would decrease. Members of the International Nitrogen initiative have been considering the options humanity has for recovering. Their goal is to institute an International Nitrogen Management System (INMS) to guide nitrogen use. The next step is to develop a more coherent framework for policies dealing with nitrogen use and wastage. The only way to deal with this problem is holistic. Fractured responses to the problem have led to no positive way forward. The significant change we have to make comes with how we grow our crops. Not even Insurance Hero could save you from a world devastated by nitrogen pollution. A fundamental change in the use of nitrogen fertilizers can cause a significant decrease in nitrogen pollution. It's a drastic step but a necessary one if we are to reduce our impact on the world's ecosystems.