Quentin Rowe
Max Tegmark calculated a Really Big Number1 (RBN). It represents the probability of you having an identical Alter Ego (AE) at some other place than where you are now. This distance is so vast, it is many many times beyond your cosmological horizon, and way beyond any causal effect governed by the speed of light. The distance he calculated is 10^10^29m to your nearest AE, resplendent with a supporting environment - namely an identical Earth. 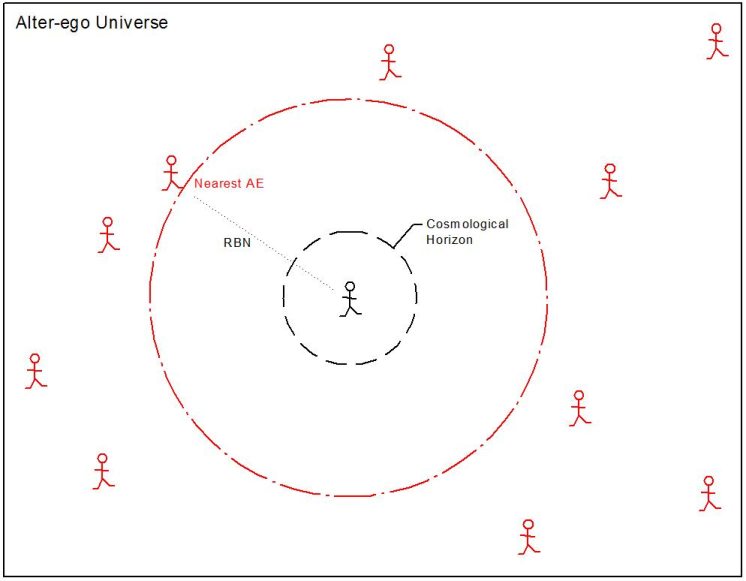 In Tegmark's most basic Level 1 Multiverse1 (L1M), there are infinite copies of your AE spread in all directions. Your AE's live on identical earths, with an identical histories.  The greater the inclusive volume of your AE, the greater, proportionaly, is the RBN. For example, you could include the solar sytem, the milkyway, or even an entire Hubble Volume (HV). By including your AE's history,  he indicates it is space-time specific. So the RBN varies inversely for any time deviation also.

What Tegmark doesn't elaborate on is how direction affects that probability, and this is what I'd like to explore as there is an implication of a large scale probabilistic structure. It comes down to how you would, in a 4D space-time, spacialy and temporaly distribute all the possible arrangements of matter&energy in a way that doesn't conflict with the calculated probabilities.

You would not have the same odds of finding your AE at the same distance for all directions - otherwise you would be surrounded by a spherical shell of AE's. Seeing as you are your ego's own AE, that would imply you are residing in your own shell, which means you would be surrounded by a slightly curved plane of AE's. One method around this unlikely scenario is to invoke the principle that all AE's (being identical in every way) share the same probability/ distance relationship (PDR). This means we must include the Tegmark PDR into the definition of your AE's, and therefore your own space-time.

If we allow for the other inevitable AE's, rather than just a pair, we can shed the shell and allow all AE's an equal chance of finding each other. The most probable (read compact) structure for this is tetrahedrally stacked-spheres. Other stacks or even amorphous structures are valid too, but they would be less probable. A single direction gives the minimum Tegmark RBN, but un-even probabilities for each AE, thus breaking the principle of an equal PDR. Spheres stacked tetrahedrally give a minimum of four directions of equal probability of finding your AE, from each AE's point of view, thus satisfying the principle of an equal PDR.

Which leads me to ask, is a tetrahedral structure the most probable and largest structure permited in a L1M?

I'm a design engineer, with a deep interest and respect for the scientific method. I am taking steps to study at a university in the fields of the...