Some materials change their electrical resistance in the presence of an external electromagnetic field. This concept is fundamental to data storage. Understanding large resistance changes, known as colossal magnetoresistance, could lead to new devices with increased data density and reduced power requirements.

"This is an extremely important piece of work with broad potential application in developing the next generation of electronic and data-storage devices," said Brookhaven physicist Yimei Zhu.

The Brookhaven scientists were studying crystalline perovskite manganites that had been doped with extra charge carriers - electrons or "holes" (the absence of electrons) - using various state-of-the-art electron microscopy techniques. In an unprecedented experiment, the scientists used a scanning-tunneling microscope that was built inside an electron microscope to apply an electric stimulus to the sample while observing its response at the atomic scale. 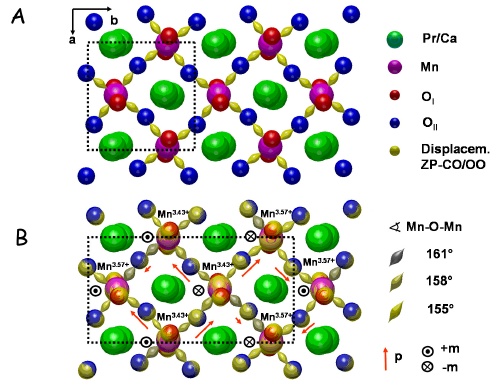 Using this technique, the scientists obtained, for the first time, direct evidence that a small electric stimulus can distort the shape of the crystal lattice, and also cause changes in the way charges travel through the lattice. The lattice distortions accompanied the charge carrier as it moved through the lattice, producing a particle-like excitation called a polaron. "Polarons can be pictured as a charge carrier surrounded by a 'cloth' of the accompanying lattice vibrations," Zhu said.

Zhu's group observed polarons melting and reordering - that is, undergoing a transition from solid to liquid to solid again - in response to the applied current, which the scientists have identified as the key mechanism for colossal mangetoresistance. The technique also allowed the scientists to study polaron behavior, i.e., how variations in electric field, current, and temperature affected this transition.

"We show that static long-range ordering of polarons forms a polaron solid, which represents a new type of charge and orbital ordered state," said Zhu. "The related lattice distortions connect this phenomenon to colossal resistance effects, and suggest ways of modifying charge density and electronic interactions at the vicinity of electric interfaces and electrodes."

Colossal resistance effects could result in miniaturization of electric circuits that operate at lower power. This work therefore has direct impact on the application of these materials in the development of new electronic and spintronic devices (devices that use 'a combination of electron spin and charge). Such devices include new forms of "nonvolatile" computer memory (memory that can retain stored information even when not powered) such as resistive random access memory (RRAM).

This work was done in collaboration with Christian Jooss, a Brookhaven visiting scientist, and colleagues from the University of Goettingen, Germany. The work was funded by the Office of Basic Energy Sciences within the U.S. Department of Energy's Office of Science and by the German Research Foundation.