Tidal marshes, which nurture marine life and reduce storm damage along many coastlines, should be able to adjust to rising sea levels and avoid being inundated and lost, if their vegetation isn't damaged and their supplies of upstream sediment aren't reduced, a new Duke University study suggests.

Such marshes "offer great value as buffers of coastal storms in cities such as New Orleans, which is separated from the Gulf of Mexico by marshlands," Matthew Kirwan and A. Brad Murray said in a report published online on Monday, March 26, in the journal "Proceedings of the National Academy of Sciences." 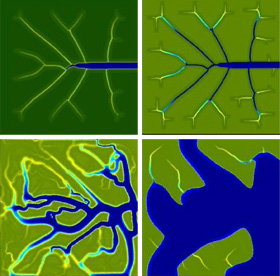 The researchers built a 3-D computer model that agrees with other recent work in suggesting that marshlands have some potential for adapting to environmental change. However, the Duke modeling also suggests that substantially disturbing the wetlands' plants or starving them of sediment could disrupt that equilibrium.

These coastal systems of water-tolerant plants and tidal channels also "provide highly productive habitat and serve as nursery grounds for a large number of commercially important fin and shellfish," according to the researchers. Murray is an associate professor of geomorphology and coastal processes at Duke's Nicholas School of the Environment and Earth Sciences. Kirwan, the report's first author, is a doctoral student working with Murray.

Despite those benefits, a variety of environmental changes often linked to humans -- including sea-level rise, sinking land and alterations to sand and silt supplies that anchor the wetland plants -- are "affecting coastal marshes worldwide," the scientists said.

The research was funded by the National Science Foundation and the Andrew W. Mellon Foundation.

The team's model, which was based partly on field studies done in South Carolina, and compared with observations in Louisiana, Massachusetts and British Columbia marshlands, uses computerized mathematical equations to help researchers evaluate the evolution of marsh shapes and complex ecosystems.

The model describes how vegetation and sediments can meld into living "platforms" that adjust to changing water levels. It also factors in how tidal creeks and channels can both supply silt and sand to the evolving matrix or help undo that process through erosion.

"With a steady, moderate rise in sea level, the model builds a marsh platform and channel network (that rises) with the rate of sea-level rise, meaning water depths and biological productivity remain temporarily constant," said the new report.

"If the vegetation is intact, it holds the system in place and enhances the trapping of sediments and tends to minimize the erosion," Murray said. "Up to some high level of sea-level rise, the system is going to keep itself in place because of that vegetation."

But the model also shows that removing some vegetation or reducing sediment supplies will set the stage for increasing water depths, a change exacerbated as the rates of rising sea levels increase.

Those changes might set the stage for "a scary metastable state," Murray said. Under that state, "conditions would tend to revert to an open-water subtidal basin that becomes too deep for the plants to come back," he said.

"We think that could be why marshes in the Chesapeake Bay region as well as in Louisiana are tending to deteriorate," he said. "That's because those are both places with relatively high sea-level rise rates, and because of land-use changes that decrease rates of sediment delivery downstream."

Such land-use changes could include the damming of rivers and the reforestation of formerly open land.

In fact, the study suggests that heavy sediment runoff during the extensive deforestation of America's colonial period may have created the conditions that built up today's extensive -- but now possibly "metastable" -- marshlands along the East Coast.

Written from a news release by Duke University.