An international team of astronomers with the Trans-atlantic Exoplanet Survey today announce the discovery of their third planet, TrES-3. The new planet was identified by astronomers looking for transiting planets - that is, planets that pass in front of their home star - using a network of small automated telescopes in Arizona, California, and the Canary Islands. TrES-3 was discovered in the constellation Hercules about 10 degrees west of Vega, the brightest star in the summer skies.

A computer-generated simulation of TrES-3 crossing (transiting) the disk of its host star. TrES-3 transits farther from the disk center than any other known transiting planet. The transit of TrES-3 causes a drop in the brightness of its home star of about two and a half percent. This slight dimming of the star's light was noticed and measured by the TrES researchers, who used the parameters of the transit to determine the planet's mass, size and other properties. Credit: Jeffrey Hall, Lowell Observatory

"TrES-3 is an unusual planet as it orbits its parent star in just 31 hours!," said Georgi Mandushev, Lowell Observatory astronomer. "That is to say, the year on this planet lasts less than one and a third days. It is also a very massive planet - about twice the mass of the solar system's biggest planet, Jupiter - and is one of the planets with the shortest known periods."

The new planet TrES-3 was first noticed by Lowell Observatory's Planet Search Survey Telescope (PSST), set up and operated by Edward Dunham and Georgi Mandushev. The Sleuth telescope, maintained by David Charbonneau (CfA) and Francis O'Donovan (Caltech), at Caltech's Palomar Observatory also observed transits of TrES-3, confirming the initial detections. TrES-3 is about 1,500 light-years distant and because it is so close to its host star, it is very hot, about 1,500 degrees Kelvin.

"TrES-3 will be an intriguing object to study more deeply, said Edward Dunham, Lowell Observatory instrument scientist. "For example, its tight orbit causes it to be illuminated very strongly. This may make it possible to measure the variation in reflected light as it goes through its phases. This will tell us how reflective its atmosphere is." 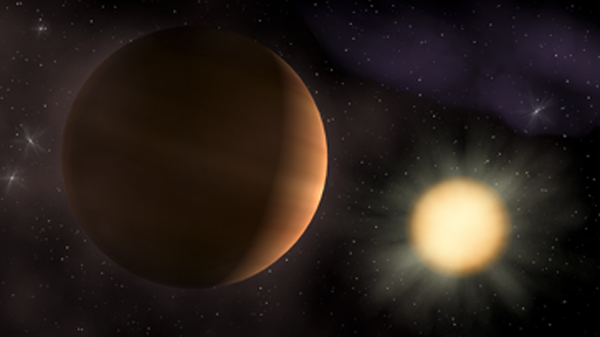 A computer-generated simulation of TrES-3 as seen from the night side, with its host star in the distance. The planet's home star is slightly smaller and cooler than the Sun, and is about six times larger than the planet. TrES-3 is a gas giant, similar to our own Jupiter but about 30 percent bigger and about twice as massive. Unlike Jupiter, however, TrES-3 is very close to its parent star and orbits it in 31 hours. That means that the year on TrES-3 lasts less than one and one-third Earth days. Credit: Jeffrey Hall, Lowell Observatory

By definition, a transiting planet passes directly between Earth and the star, causing a slight dimming of the star's light in a manner similar to that caused when the moon passes between the Sun and Earth during a solar eclipse. To look for transits, the small telescopes are automated to take wide-field timed exposures of the clear skies on as many nights as possible. When an observing run is completed for a particular field - usually over an approximate two-month period - astronomers measure very precisely the light from every star in the field in order to detect the possible signature of a transiting planet. "TrES-3 blocks off about 2.5 percent of the light of the star as it passes in front of it," said Mandushev. "With our telescopes, we can measure this tiny drop in the star's brightness and deduce the presence of a planet there."

TrES-3 was also observed by members of the Hungarian Automated Telescope Network (HATNet). The study's lead author, Francis O'Donovan of Caltech, highlighted the teamwork between TrES and HAT. "The search for extrasolar planets is an exciting and competitive field. I was happy to see that cooperation between separate teams led to a rapid confirmation of this planet," said O'Donovan.

In order to help confirm they had found a planet, HATNet's Gaspar Bakos and CfA's Guillermo Torres switched from the 10-centimeter TrES telescopes to one of the 10-meter telescopes at the W. M. Keck Observatory on the summit of Mauna Kea, Hawaii. Using this giant telescope, they confirmed that they had found a new planet. In order to measure accurately the size and other properties of TrES-3, astronomers also made follow up observations of it with bigger telescopes at Lowell Observatory and Fred L. Whipple Observatory in Arizona, and with the Las Cumbres Observatory Global Telescope in Hawaii.

Other authors of the paper "TrES-3: A Nearby, Massive, Transiting Hot Jupiter in a 31-hour Orbit," are Gaspar Bakos, David Charbonneau, David Latham, Alessandro Sozzetti, Robert Stefanik, and Guillermo Torres of the Harvard-Smithsonian Center for Astrophysics; Timothy Brown, Nairn Baliber, and Marton Hidas of the Las Cumbres Observatory Global Telescope; Geza Kovacs of Konkoly Observatory in Hungary; Mark Everett and Gilbert Esquerdo of the Planetary Science Institute; Markus Rabus, Hans Deeg, and Juan Belamonte of the Instituto de Astrofisica de Canaries in Tenerife, Spain; and Lynne Hillenbrand of the California Institute of Technology.