Physicists at JILA have demonstrated that the warmer a surface is, the stronger its subtle ability to attract nearby atoms, a finding that could affect the design of devices that rely on small-scale interactions, such as atom chips, nanomachines, and microelectromechanical systems (MEMS). 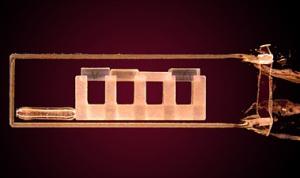 JILA scientists measured how temperature affects the Casimir-Polder force using an apparatus that holds four small squares of glass inside a vacuum chamber. A cloud of ultracold atoms in a Bose-Einstein Condensate (BEC) was held a few micrometers below one piece of glass, and the force was calculated based on the wiggling of the BEC. Warmer glass magnified the attraction between the surface and the atoms. (Credit: E. Cornell group/JILA)

The research highlights an underappreciated aspect of the elusive Casimir-Polder force, one of the stranger effects of quantum mechanics. The force arises from the ever-present random fluctuation of microscopic electric fields in empty space. The fluctuations get stronger near a surface, and an isolated neutral atom nearby will feel them as a subtle pull--a flimsy, invisible rubber band between bulk objects and atoms that may be a source of friction, for example, in tiny devices. The JILA group previously made the most precise measurement ever of Casimir-Polder, measuring forces hundreds of times weaker than ever before and at greater distances (more than 5 micrometers). JILA is a joint institute of the National Institute of Standards and Technology (NIST) and the University of Colorado at Boulder.

Now, as reported in a paper scheduled for this week's issue of Physical Review Letters, the JILA team has made the first measurement of the temperature dependence of this force. By using a combination of temperatures at opposite extremes--making a glass surface very hot while keeping the environment neutral and using ultracold atoms as a measurement tool--the new research underscores the power of surfaces to influence the Casimir-Polder force. That is, electric fields within the glass mostly reflect inside the surface but also leak out a little bit to greatly strengthen the fluctuations in neighboring space. As a result, says group leader and NIST Fellow Eric Cornell, "warm glass is stickier than cold glass."

The experiments demonstrate the practical use of a Bose-Einstein Condensate (BEC), a form of matter first created at JILA a decade ago. In a BEC, thousands of ultracold atoms coalesce into a "superatom" in a single quantum state. Cornell, who shared the 2001 Nobel Prize in Physics for this development, says the purity and sensitivity of a BEC makes it uniquely useful as a tool for measuring very slight forces and changes.

To measure the Casimir-Polder force, a BEC of about 250,000 rubidium atoms in a magnetic trap was placed a few micrometers from a glass plate. As the BEC was brought closer to the surface, the "wiggling" of the condensate was observed over time. Based on the changes in the oscillation frequency, the researchers calculated the force. In the latest experiment, measurements were made as a laser beam was used to heat the glass plate from room temperature (about 37 degrees C or 98 degrees F) to very hot (about 330 degrees C or 630 degrees F), while the surrounding environment was kept near room temperature. The strength of the force was shown to be nearly three times larger when the glass temperature doubled. The researchers also were able to separate the forces emanating from the surface versus the environment.

The research is supported in part by the National Science Foundation. The JILA group collaborated with theorists from the University of Trento, Italy.