Simple experiments don't always have simple explanations. This 'throbbing' oil experiment, for example, can be done in your kitchen but getting to the heart of the throbbing has not been possible until now.

Try it yourself. Pour clean water onto a small plate. Wait for all the ripples to stop. Then mix a small amount of mineral oil with an even smaller amount of detergent. Squeeze a tiny drop of that mixture onto the water and watch in amazement as the oil appears to pump like a beating heart.

It's a simple experiment, but explaining what makes the drop of oil throb--and then stop when deprived of fresh air--has long mystified the scientific community. Now, in work that could have applications in fields from biology to environmental engineering, an MIT team has cracked the case.

In the July 25 issue of the Journal of Fluid Mechanics, MIT Professors Roman Stocker of civil and environmental engineering and John Bush of mathematics explain what happens when an oil drop containing a water-insoluble surfactant (or material that reduces the surface tension of a liquid, allowing easier spreading) is placed on a water surface.

"It's an easy experiment to make. But getting the theory for it was not straightforward," Bush said. "Roman turned a microscope loose on the problem--which was key to finally understanding it."

The question of the physical phenomenon of oil spreading on a surface has been around for some time. Benjamin Franklin wrote about it in 1774 in the Transaction of the American Philosophical Society, after he saw Bermuda spear fishermen use oil to damp waves so they could more easily see fish under the ocean surface.

The question Stocker and Bush examined had another dimension: why oil with an added surfactant doesn't come to rest, but instead contracts and repeats the process in a periodic fashion.

"We're dealing with three interfaces: between the oil drop, the water in the Petri dish, and the air above it," Stocker said, explaining surface tension. "A detergent is a surfactant, which reduces the surface tension of a liquid. The detergent molecules we added to the oil drop prefer to stay at the interface of the oil and water, rather than inside the oil drop."

Think of the oil detergent drop as a small lens with a rounded bottom. The surfactant in the drop moves to the bottom surface of the lens, where it interacts with the water to decrease the surface tension where oil meets water. This change in tension increases the forces pulling on the outer edges of the drop, causing the drop to expand.

The center of the drop is deeper than the edges, so more surfactant settles there, reducing the surface tension correspondingly. This causes the oil and surfactant near the outer edges of the drop to circulate. This circulation creates a shear (think of it as two velocities going in opposite directions), which generates very tiny waves rolling outward toward the edge. When these waves reach the edge, they cause small droplets to erupt and escape onto the water surface outside the drop. Videomicroscopy - essentially, attaching a video camera to a microscope - was critical in observing this step in the process. Those droplets of oil and surfactant disperse on the water and decrease the surface tension of the water surface, so the drop contracts.

As the surfactant evaporates, the surface tension of the water increases again, and the system is reset. Forces pull at the outer edges of the lens, and the cyclical process begins again. 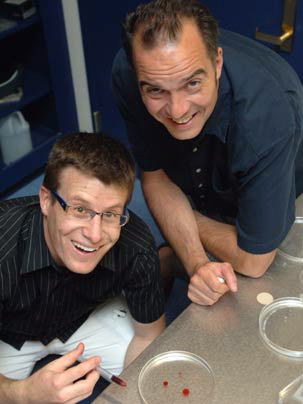 Professors Roman Stocker, left, and John Bush display a mixture of oil, detergent and water. Their research explains what happens when an oil drop containing a water-insoluble surfactant is placed on a water surface. Photo / Donna Coveney

But the beating ceases instantly when Stocker and Bush put a lid over it. If the surfactant can't evaporate, the oil drop remains stable. In the end, it was being able to stop the beating process that made it clear to the researchers that evaporation played a central role in the mechanism.

"This is a bizarre and subtle mechanism. Everybody was flummoxed," said Bush, whose recent research includes understanding how some insects walk on water.

He first heard about the oil drop phenomenon from Professor Emeritus Harvey Greenspan of mathematics, who had pondered it for some time. Bush in turn talked to Stocker, who was then an instructor in the Department of Mathematics. It took about three years of sporadic work (without funding), and the help of two undergraduate students who carried out the lab repetitions--Margaret Avener and Wesley Koo--but Stocker and Bush finally solved it.

To what end, the researchers don't yet know. "One rationalizes the physical world by understanding the mechanisms," said Bush, explaining the importance of basic scientific research. "One can never predict which mechanisms will be important."

"Oil contamination of water resources is a prominent problem in environmental engineering," said Stocker. "Awareness of the fundamental mechanisms governing the interaction between the two phases is critical to devise sound engineering solutions for remediation."

Spontaneous oscillations are observed in many natural systems, including nerve cells, muscle tissue, and the biological clocks responsible for circadian rhythms, the professors said. And previous work published on the oil drop problem had been carried out by scientists interested in seeing if the mechanism could explain biological oscillations.