Monsoons, the life-giving, torrential rains of Asia and Africa, have an ancient, unsuspected connection to previous Ice Age climate cycles, according to scientists at the University of California, Santa Barbara, and at Kiel University in Germany.

Analyzing a 120-foot sediment core from the Gulf of Guinea in equatorial West Africa recovered by a German research expedition, UC Santa Barbara postdoctoral scholar Syee Weldeab and paleoclimatologist David Lea have revealed 155,000 years of continuous monsoon history. “It is the longest, most detailed record of West African monsoons that has ever been reconstructed,” said Lea. The find captured several Ice Age climate cycles. 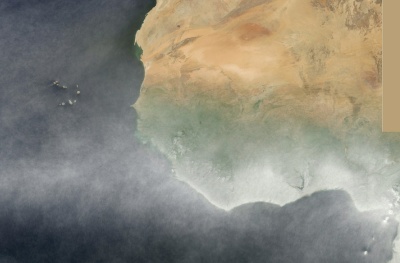 From chemical data locked into fossil plankton shells, the researchers documented how the strength of ancient monsoons is directly tied to two factors: the Northern Hemisphere’s climate shifts due to the expansion and contraction of the European and North American continental ice sheets, and the amount of local solar radiation hitting the African region.

“This is the first study to definitively tie together the influence of these two factors over several climate cycles,” said Lea, who has published the collaborative results in the June 1 issue of the journal Science under the heading “155,000 Years of West African Monsoon and Ocean Thermal Evolution.” He noted that there is “a dramatic resurgence of the West African monsoon” at the end of each glacial cycle.

The study’s importance to the modern climate, said Lea, lies in its “demonstration of the sensitivity of the monsoon region to global climate conditions.” With hundreds of millions of people dependent on subsistence agriculture in these regions, he said, “Insights from the study of ancient climate cycles will lead to more confident predictions of how monsoon patterns will evolve in a future warmed by greenhouse gases.”