The monsoon, the largest climate system in the world, governs the climate in much of mainland Asia, bringing torrential summer rains and dry winters.

The authors make the surprising claim in Nature that the monsoon is as much a result of global climate as it is a result of topography. 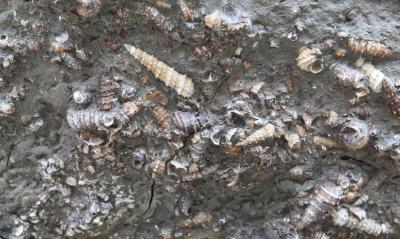 35-million-year-old snail fossils in Myanmar contain the record of the past climate in their shells. Analyses show these snails lived in a monsoon climate that had dry winters and very rainy summers. These freshwater gastropods from the Yaw formation (37-34 million years ago) were sampled near the town of Kalewa in central Myanmar. Credit: Alexis Licht

"It is surprising," said lead author Alexis Licht, a research associate at the University of Arizona. "People thought the monsoon started much later."

Co-author Jay Quade, a UA professor of geosciences, said, "This research compellingly shows that a strong Asian monsoon system was in place at least by 35-40 million years ago."

Unraveling the monsoon's origins required contributions from three different teams of scientists and they all showed the monsoon climate pattern occurred 15 million years earlier than previously thought. Combining different lines of evidence from different places strengthened the group's confidence in the finding. The climate modeling team also linked the development of the monsoon to the increased CO2 of the time.

Licht and his colleagues at Poitiers and Nancy universities in France examined snail and mammal fossils in Myanmar. The group led by G. Dupont-Nivet and colleagues at Utrecht University in the Netherlands studied lake deposits in Xining Basin in central China. J.-B. Ladant and Y. Donnadieu of the Laboratory of Sciences of the Climate and Environment (LSCE) in Gif-sur-Yvette, France, created climate simulations of the Asian climate 40 million years ago.

A complete list of authors of the group's publication, "Asian monsoons in a late Eocene greenhouse world," is at the bottom of this release, as is a list of funding sources.

To learn about the past environment, Licht analyzed 40-million-year-old freshwater snail shells and teeth of mammals to see what types of oxygen they contained. The ratio of two different forms of oxygen, oxygen-18 and oxygen-16, shows whether the animal lived in a relatively wet climate or an arid one.

To his surprise, the oxygen ratios told an unexpected story: The region had a seasonal pattern very much like the current monsoon – dry winters and very rainy summers.

"The early primates of Myanmar lived under intense seasonal stress – aridity and then monsoons," he said. "That was completely unexpected."

Licht's next step is to investigate how geologically short-term increases of atmospheric CO2 known as hyperthermals affected the monsoon's behavior 40 million years ago.

"The response of the monsoon to those hyperthermals could provide interesting analogs to the ongoing global warming," he said.