Simple nucleotide polymorphisms (SNPs), are single variations affecting only one nucleotide or base of the genomic sequence. Despite humans sharing 99.9% of the genome sequence, there are still 3 million genetic variations –which make us different from one another– 90% of which are due to SNPs.

An international collaboration has performed a large-scale study on genetic differences between patients infected by HIV, and is the first study of this kind in the field of infectious disease.

Results point to two gene variants related to the immune system. More precisely, these variations are in a genetic region responsible for the determination of immune response capacity against a number of infectious diseases, including AIDS. 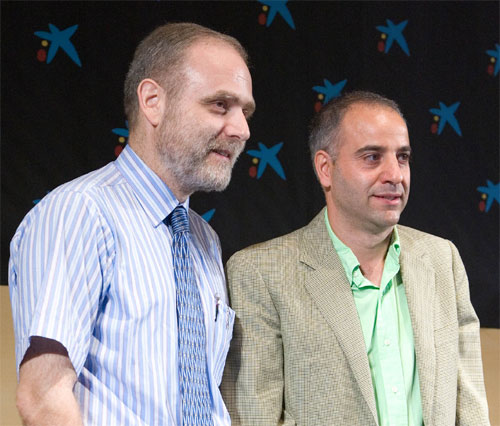 Javier Martínez-Picado, ICREA research professor in the Foundation irsiCaixa of Hospital Germans Trias i Pujol, and Josep M. Miró, consultant of the Unit of Infectious Diseases and AIDS of Hospital Clínic-IDIBAPS of Barcelona

These variations are located in the short arm of chromosome 6 in genes controlling HLA-B and HLA-C molecular systems, responsible for the activation of the immune system so that it is able to locate and destroys cells infected by HIV. This study has also identified a third genetic variation involved in immune damage of patients, particularly in a gene encoding a protein which seemingly participates in viral replication, and is also located in chromosome 6.

Genetic variants associated to genes encoding HLA-B and HLA-C molecular systems would explain up to 15% of viral load variation among patients, whereas the third genetic variation would explain 5.8% of these differences. Further study of other genetic regions involved in this process is needed. Nevertheless, HLA-B variation presents the highest correlation with the immune response described until now.

The research was conducted with the latest genomics and bioinformatics technologies, analysing 550,000 variations of the complete human genome in 486 patients, mostly European, preselected from 30,000 potential candidates.

Obtained information will be very useful in the long road to a more rational vaccine development. This and similar studies should push us toward more personalised medicine, where the most suitable drugs for each individual would be determined on the basis of their gene characteristics.

Researchers participating in this study have been coordinated by Amalio Telenti, co-director of the Institute of Macrobiology of the University of Lausanne, Switzerland, and by David Goldstein, director of the Center for Population Genomics and Pharmacogenetics of the Duke Institute for Genome Sciences and Policy, US. This project is framed within the context of the international consortium CHAVI (Center for HIV-AIDS Vaccine Immunology; www.chavi.org), born in July 2005 with the aim to conduct research on new vaccine strategies against HIV. Subsequently, European research groups and one Australian group joined this project with the name EuroCHAVI, and have developed, in coordination to the Duke Institute, the present study.