The fact that female wasp spiders have numerous sexual contacts is something which their male partners cannot prevent. What they can do, however, is ensure that no offspring ensue from these tête à têtes with their rivals: the male spiders simply place a chastity belt on their partner while copulating. The tip of their genital breaks off during intercourse, blocking the sexual orifice of the lady spider. Biologists from the universities of Bonn and Hamburg report on this amazing mechanism in the journal ‘Behavioral Ecology’ (vol. 18, pages 174-181, 2007).

When a male wasp spider discovers a potential partner, he turns her on by shaking her web. The female thereupon supports herself on her long legs on the web so that the male, who is much smaller, can then creep under her body. The rest works hydraulically: the tip of a transformed leg filled with sperm is inserted into the female’s sexual orifice – like a ski boot in its binding. 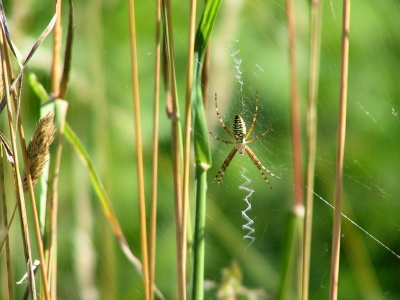 The female usually puts an end to the affair after a few seconds by attacking her partner and killing him if he does not escape in time. ‘When the male detaches himself from the female, in more than 80 per cent of cases the tip of his genital breaks off,’ the Bonn lecturer Dr. Gabriele Uhl says. ‘The tip then remains in the sexual orifice like a cork, blocking it.’

Together with her colleague Professor Jutta Schneider and the behavioural biologist Stefan Nessler (both now at the University of Hamburg), Dr. Uhl has been looking for a reason for this genital mutilation. ‘There are basically two hypotheses,’ she explains. ‘On the one hand detaching part of the genital organ could help the male to escape from the female’s murderous attack. On the other hand it might be a mechanism ensuring that paternity is maintained, preventing or impeding further copulation by the female.’

Genital tip as a ‘cork’

Even when giving her a quickie, a male transfers enough sperm to fertilise all his partner’s eggs. However, if a rival male then gets a look in, his sperm cells compete during copulation with those of his predecessor. ‘The detached tip might prevent subsequent intercourse, like a chastity belt,’ Jutta Schneider explains. ‘The first male would thereby ensure that all the egg cells were fertilised by him rather than his rival.’

In his diploma thesis at the University of Bonn, Stefan Nessler has been examining more closely which of the two hypotheses is correct. The result is that whether the tip broke off or not had no significant effect on the male’s survival rate – but it did affect any subsequent copulation with another male: when the sexual orifice was blocked, the game was over after only eight seconds; normally male spiders copulate for twice as long. ‘The results show that the blockage at least impedes copulation,’ Stefan Nessler emphasises. ‘Initial morphological studies show that the detached tip plugs the orifice so securely that the transfer of semen is probably largely excluded.’ 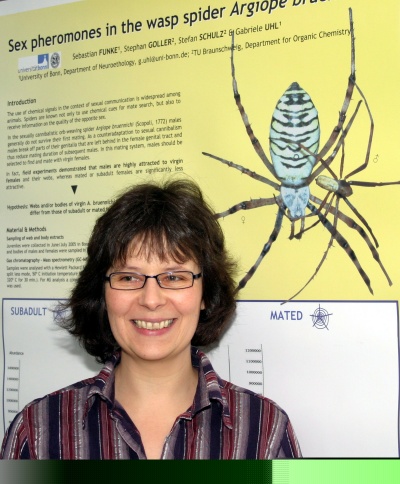 The researchers have now been able to show that other species of wasp spiders also have this ‘plugging mechanism’. What they all have in common is that the female attempts to kill her partner during intercourse. ‘We presume that genital mutilation only makes sense if there is hardly any chance of further copulation anyway,’ Gabriele Uhl explains. ‘The males show maximum investment.’

Dr. Uhl’s diploma student Martin Busch is currently investigating a completely different strategy for preventing competitors from having intercourse: the dwarf spider produces a viscous secretion in its genital which it spurts after the sperm. This mucus plug blocks the female genital aperture so effectively that rivals can no longer copulate. Whether a mucus plug or the tip of the genital organ is used, the oviposition is unaffected by the ‘chastity belt’: ‘for that the females have a separate aperture,’ Dr. Uhl stresses. ‘In spider species with only one aperture for copulation and oviposition no such contraceptive strategies exist.’

Written from a news release by University of Bonn.