Stephanie Pulford
At least once a year, Cosmo’s cover story is about how to have better, longer sex: a turgid treatise on positions and anatomy.  Our finest ladies’ mags are ignoring the obvious.

To improve the mating of our species, we must learn from the mistakes of garden spiders and band together to end sexual cannibalism once and for all.

Female Argiope spiders only want what all of us want—the upper hand in the war of the sexes.  But your friendly neighborhood garden spider has more at stake than the proper replacement of the toilet seat.

Garden spiders’ evolution has been greatly influenced by a certain antagonism between the genders.  They regard each other as enemies who happen to have reproductive uses for each other.  As their arms race intensifies, the truculent female has evolved to a much larger size than the male, which makes her a formidable aggressor.

The male responds with sleazy tactics like waiting near a female’s web for her final molt, and forcing copulation while she’s disoriented and physically unable to defend herself. 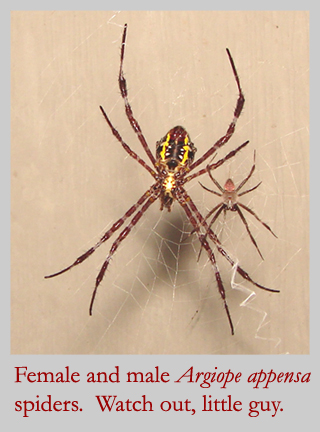 Even in their one common goal, reproduction, the spiders are in conflict.  Garden spiders generally get two chances at mating; they can switch partners or remain monogamous.

The male’s best strategy to pass along his genes is to make sure he lives to inseminate twice, and two successive encounters with the same female might give him better odds. It’s in the female’s interest to make sure that her progeny have the best chance of survival, and she seems to have a slight advantage if she’s had two genetically diverse partners.

But the female’s strategy has a misandrist bent to it, too—in the garden spider arms race, there’s a motivation to ensure that the next generation of females retains the upper hand.

Preying on their mates seemed like an excellent way for spiders to have their cake and eat it, too.

Female garden spiders will attack and devour their suitors at any time in a courtship sequence—before copulation, during or after a first insemination, and during a second.  But after a second insemination, female spiders seem to lose interest in repurposing their suitor as a post-coital snack.  Notably, female spiders prefer to attack and devour the largest of their tiny males during courtship and mating.

This behavior looks suspiciously like a ploy to limit the sexual contribution of large males to the gene pool, preserving the size difference between the genders. Thus the ladies keep control of the gene pool, handicapping the men of the next generation.

However, cannibalizing large suitors has proved about as effective as bra stuffing for selecting quality males.  Though the big guys got weeded out, their mid-mating demise didn’t prevent the spiders from successfully passing along their genes. Instead, sexual cannibalism selected for fast sperm transfer.  Males that could finish the deed quickly were more likely to escape before a female could attack, winning the males their chance for a second mating.

Thus, any male can finish a first mating once it’s underway, and the fast males get to mate again.  The female isn’t really exerting any significant control over the next generation’s male traits unless she manages to cannibalize her suitor before he begins.  Unless fast mating has some unforeseen value to the female spider, sexual cannibalism in garden spiders amounts to an evolutionary maladaption.

Ladies, sexual cannibalism ruins it for all of us and our granddaughters too.  Though we may think we’re thinning the field toward a more physically desirable male population, we’re actually skewing the gene pool towards men who can finish up and run.

Let’s work together to end sexual cannibalism—or at very least, finish it before copulation.
Run and Tumble
More Articles All Articles
About