We may not be as fit as the people of ancient Athens, despite all that modern diet and training can provide, according to research by University of Leeds exercise physiologist, Dr Harry Rossiter.

Dr Rossiter measured the metabolic rates of modern athletes rowing a reconstruction of an Athenian trireme, a 37m long warship powered by 170 rowers seated in three tiers. Using portable metabolic analysers, he measured the energy consumption of a sample of the athletes powering the ship over a range of different speeds to estimate the efficiency of the human engine of the warship. The research is published in New Scientist today (February 8). 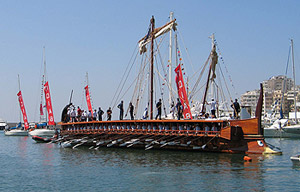 Trireme in a harbour. (Image courtesy of University of Leeds)

By comparing these findings to classical texts that record details of their endurance, he realised that the rowers of ancient Athens – around 500BC – would had to have been highly elite athletes, even by modern day standards.

Says Dr Rossiter: “Ancient Athens had up to 200 triremes at any one time, and with 170 rowers in each ship, the rowers were clearly not a small elite. Yet this large group, it seems, would match up well with the best of modern athletes. Either ancient Athenians had a more efficient way of rowing the trireme or they would have to be an extremely fit group. Our data raise the interesting notion that these ancient athletes were genetically better adapted to endurance exercise than we are today.”

Dr Rossiter worked closely with Professor Boris Rankov, Professor of Classics at Royal Holloway, University of London to interpret the details of the endurance of the ancient rowers from classical texts. Many of these texts were originally collected and used to estimate sustainable ship speeds in The Athenian Trireme (CUP, 2rd edition 2000), which Professor Rankov co-authored.

For example, one account talks of the Athenians quelling a revolt in Mytilene on the island of Lesbos in the eastern Aegean. The Athenian assembly ordered all Mytiline’s men to death, and despatched a trireme to carry out this command. The next day, the assembly relented and sent a second trireme to halt the massacre. According to the records of Thucydides, this second trireme would have made the journey in about 24 hours, rowing in shifts and eating while they rowed, so the ship could travel non-stop.

Says Dr Rossiter: “From these details we can estimate the average sustainable ship speeds. Then, using the reconstruction we measured the metabolic demands of the human engine required to sustain these speeds. If the historians are correct, we would struggle to find enough people at that level of fitness today to power the ships at those speeds.”

Triremes were a huge technological advance, allowing Athens to dominate the seas. They had a strong keel, taken forward into a huge spike covered in bronze plates, which meant they could ram and hole enemy ships – a new technique in naval warfare. To ensure sufficient impact to cause damage, the triremes had to reach great speeds – so were designed with more than three times more rowers than earlier warships. By placing the rowers on three tiers, the ship could remain a manoeuvrable length and weight.

The trireme used in Dr Rossiter’s research, Olympias, was built in the 1980s and was used to carry the Olympic flame to Piraeus, the port near Athens, at the start of the last Olympic Games. It is now housed in a museum in Piraeus.

Note: This story has been adapted from a news release issued by University of Leeds.