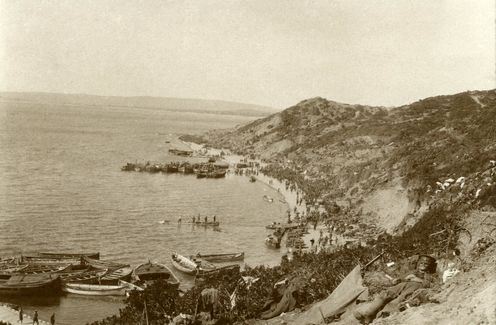 There are few geographical areas that have seen as much military action as the Gallipoli region, the site of the Australian and New Zealand Army Corp (ANZAC) landings in 1915.

The conflicts in the region include some of the most renowned wars from Greek antiquity.

Some Australian historians of Gallipoli see the study of the broader cultural history of the region as a bit of an irritation. They feel that it detracts from the focus on the  ANZACs and the remembrance of what they did. But, it is just the opposite – it enhances the story of the campaign and situates it in a notably rich cultural context.

A history of Gallipoli

The site of Troy on the Asian side, which looks across at Cape Helles, tends to dominate the cultural history of the region. Likewise, Homer, the poet of the Iliad, dominates Western literature like no other single individual.

The presence of Troy just across the waterway did not go unnoticed by those soldiers who had a scholarly engagement with the Classics in the pre-war years, such as Patrick Shaw-Stewart, Compton Mackenzie, John Masefield and Sir Ian Hamilton. Many British soldiers, like Robert Graves, from the great private schools and universities took Classical texts with them to the Western Front. But those destined for Gallipoli understandably felt that they had a special connection with antiquity.

Poet Rupert Brooke could scarcely conceal his delight that he was going to Gallipoli – to the battlefields of Troy – rather than to France or Belgium. As it turned out, he never made it because he died at Scyros, Achilles’ island, just before the first landings at Helles. There were many other renowned struggles in the immediate area too, including the Greek war with the Persians of 480-479 BC. This war must surely be one of the most significant struggles in European history, given that the very existence of the Greek cities depended on their victory over the enemy.

Herodotus is our main historical source for this struggle. He ends his whole work on the Gallipoli peninsula at the unassuming little town of Eceabat, a short drive from the Anzac battlefield.

Later in the same century, the Athenians and Spartans, along with their allies, fought some monumental sea-battles in the Dardanelles straits. These were part of the Peloponnesian war fought between the two Greek superpowers from 431 to 404 BC. The battle of Cynossema (411 BC, off modern Kilitbahir, near Eceabat) involved about 160 ships. It was fought only a little way up the channel from where the French and British navies came to grief on March 18, 1915.

Similarly, the battle of Aigospotami (405 BC, near modern Gelibolu) saw an even more monumental struggle of about 350 ships. It might be said that this last struggle was the final and decisive conflict of the Peloponnesian war, and produced the imminent defeat of Athens.

In the fourth century, Alexander the Great – probably the peninsula’s most famous visitor – came to the peninsula and sent his army across the narrows from Sestos to Abydos. He went down to tip of the Gallipoli at Helles and crossed from there to Homer’s Troy.

The role of Charles Bean

So, ancient Greek heroes in the region were in no short supply for the writers at Gallipoli in 1915, should they have chosen to show an interest. But did this concern ever go beyond a poetic and socioeconomic elite?

It did, in the figure of Charles Bean, the Australian correspondent and official historian of the First World War. He ensured that the Greek context would have a part to play in the way that the Australian sojourn at Gallipoli would be remembered. Bean had studied Classics as a child in Australia and Britain, and then went to Oxford where he studied Greats (that is, Classics). No-one among the Australians was more conscious of the ancient Greek context of Gallipoli than Bean. No-one was able to use it to such good effect. He is the master of memorializing soldiers in the Greek way, but without explicit reference to classical borrowings.

For instance, Bean ends his book Gallipoli Mission with reference to an inscription of ancient Athenian warriors who fell in the Dardanelles in 440 BC. But there is no explicit comparison of Athenians and ANZACs – nor does there need to be.

There will be many references to heroism and heroic conduct amid the commemoration of the  ANZACs centenary. The broader cultural context of ancient Greece will not play any part in this, nor should it really. Australia and New Zealand – and Turkey – have their own stories to tell and commemorate.

But one might also be mindful of the earlier layers of occupation of the region, and the background part that they play in the commemoration of ANZAC.

By Chris Mackie, Professor of Greek Studies at La Trobe University. This article was originally published on The Conversation. Read the original article.