Why does putting our feelings into words — talking with a therapist or friend, writing in a journal — help us to feel better? A new brain imaging study by UCLA psychologists reveals why verbalizing our feelings makes our sadness, anger and pain less intense.

Another study, with the same participants and three of the same members of the research team, combines modern neuroscience with ancient Buddhist teachings to provide the first neural evidence for why “mindfulness” — the ability to live in the present moment, without distraction — seems to produce a variety of health benefits.

When people see a photograph of an angry or fearful face, they have increased activity in a region of the brain called the amygdala, which serves as an alarm to activate a cascade of biological systems to protect the body in times of danger. Scientists see a robust amygdala response even when they show such emotional photographs subliminally, so fast a person can’t even see them. 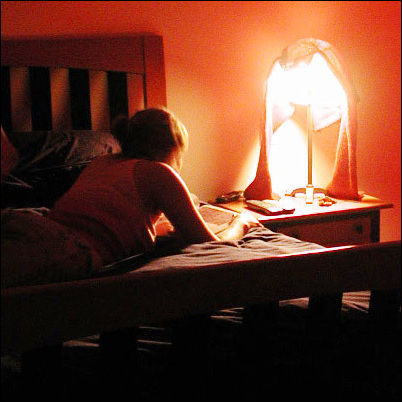 But does seeing an angry face and simply calling it an angry face change our brain response" The answer is yes, according to Matthew D. Lieberman, UCLA associate professor of psychology and a founder of social cognitive neuroscience.

“When you attach the word ‘angry,’ you see a decreased response in the amygdala,” said Lieberman, lead author of the study.

The study showed that while the amygdala was less active when an individual labeled the feeling, another region of the brain was more active: the right ventrolateral prefrontal cortex. This region is located behind the forehead and eyes and has been associated with thinking in words about emotional experiences. It has also been implicated in inhibiting behavior and processing emotions, but exactly what it contributes has not been known.

“What we’re suggesting is when you start thinking in words about your emotions —labeling emotions — that might be part of what the right ventrolateral region is responsible for,” Lieberman said.

If a friend or loved one is sad or angry, getting the person to talk or write may have benefits beyond whatever actual insights are gained. These effects are likely to be modest, however, Lieberman said.

Many people are not likely to realize why putting their feelings into words is helpful.

“If you ask people who are really sad why they are writing in a journal, they are not likely to say it’s because they think this is a way to make themselves feel better,” Lieberman said. “People don’t do this to intentionally overcome their negative feelings; it just seems to have that effect. Popular psychology says when you’re feeling down, just pick yourself up, but the world doesn’t work that way. If you know you’re trying to pick yourself up, it usually doesn’t work — self-deception is difficult. Because labeling your feelings doesn’t require you to want to feel better, it doesn’t have this problem.”

Thirty people, 18 women and 12 men between ages of 18 and 36, participated in Lieberman’s study at UCLA’s Ahmanson-Lovelace Brain Mapping Center. They viewed images of individuals making different emotional expressions. Below the picture of the face they either saw two words, such as “angry” and “fearful,” and chose which emotion described the face, or they saw two names, such as “Harry” and “Sally,” and chose the gender-appropriate name that matched the face.

As a result, an individual may feel less angry or less sad.

This is ancient wisdom,” Lieberman said. “Putting our feelings into words helps us heal better. If a friend is sad and we can get them to talk about it, that probably will make them feel better.”

The right ventrolateral prefrontal cortex undergoes much of its development during a child’s preteen and teenage years. It is possible that interaction with friends and family during these years could shape the strength of this brain region’s response, but this is not yet established, Lieberman said.

One benefit of therapy may be to strengthen this brain region. Does therapy lead to physiological changes in the right ventrolateral prefrontal cortex" Lieberman, UCLA psychology professor Michelle Craske and their colleagues are studying this question.

After the participants left the brain scanner, 27 of them filled out questionnaires about “mindfulness.” Mindfulness meditation, which is very popular in Southeast Asia and elsewhere, originates from early Buddhist teachings dating back some 2,500 years, said David Creswell, a research scientist with the Cousins Center for Psychoneuroimmunology at the Semel Institute for Neuroscience and Human Behavior at UCLA.

Mindfulness is a technique in which one pays attention to his or her present emotions, thoughts and body sensations, such as breathing, without passing judgment or reacting. An individual simply releases his thoughts and “lets it go.”

“One way to practice mindfulness meditation and pay attention to present-moment experiences is to label your emotions by saying, for example, ‘I’m feeling angry right now’ or ‘I’m feeling a lot of stress right now’ or ‘this is joy’ or whatever the emotion is,” said Creswell, lead author of the study, which will be featured in an upcoming issue of Psychosomatic Medicine, a leading international medical journal for health psychology research.

Creswell said Lieberman has now shown in a series of studies that simply labeling emotions turns down the amygdala alarm center response in the brain that triggers negative feelings.

Creswell, who conducted the mindfulness research as an advanced graduate student of psychology at UCLA, said mindfulness meditation is a “potent and powerful therapy that has been helping people for thousands of years.”

Previous studies have shown that mindfulness meditation is effective in reducing a variety of chronic pain conditions, skin disease, stress-related health conditions and a variety of other ailments, he said. Creswell and his UCLA colleagues — Lieberman, Eisenberger and Way — found that during the labeling of emotions, the right ventrolateral prefrontal cortex was activated, which seems to turn down activity in the amygdala. They then compared participants’ responses on the mindfulness questionnaire with the results of the labeling study.

“We found the more mindful you are, the more activation you have in the right ventrolateral prefrontal cortex and the less activation you have in the amygdala,” Creswell said. “We also saw activation in widespread centers of the prefrontal cortex for people who are high in mindfulness. This suggests people who are more mindful bring all sorts of prefrontal resources to turn down the amygdala. These findings may help explain the beneficial health effects of mindfulness meditation, and suggest, for the first time, an underlying reason why mindfulness meditation programs improve mood and health.

“The right ventrolateral prefrontal cortex can turn down the emotional response you get when you feel angry,” he said. “This moves us forward in beginning to understand the benefits of mindfulness meditation. For the first time, we’re now applying scientific principles to try to understand how mindfulness works.

“This is such an exciting study because it brings together the Buddha’s teachings — more than 2,500 years ago, he talked about the benefits of labeling your experience — with modern neuroscience,” Creswell said. “Now, for the first time since those teachings, we have shown there is actually a neurological reason for doing mindfulness meditation. Our findings are consistent with what mindfulness meditation teachers have taught for thousands of years.”