Researchers at Boston University School of Medicine (BUSM) and McLean Hospital have found that practicing yoga may elevate brain gamma-aminobutyric (GABA) levels, the brain's primary inhibitory neurotransmitter. The findings suggest that the practice of yoga be explored as a possible treatment for depression and anxiety, disorders associated with low GABA levels.

The World Health Organization reports that mental illness makes up to fifteen percent of disease in the world. Depression and anxiety disorders both contribute to this burden and are associated with low GABA levels. Currently, these disorders have been successfully treated with pharmaceutical agents designed to increase GABA levels. 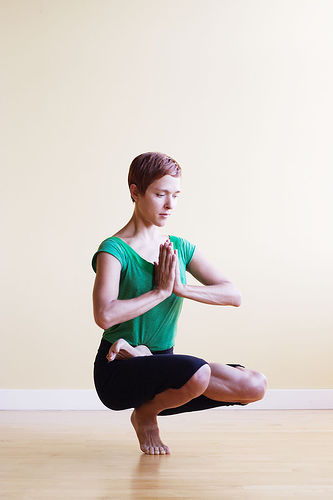 This pose puts you in the Yoga Mudra

Using magnetic resonance spectroscopic imaging, the researchers compared the GABA levels of eight subjects prior to and after one hour of yoga, with 11 subjects who did no yoga but instead read for one hour. The researchers found a twenty-seven percent increase in GABA levels in the yoga practitioner group after their session, but no change in the comparison subject group after their reading session. The acquisition of the GABA levels was done using a magnetic resonance spectroscopy technique developed by J. Eric Jensen, PhD, an assistant professor of psychiatry at Harvard Medical School and an associate physicist at McLean Hospital.

According to the researchers, yoga has shown promise in improving symptoms associated with depression, anxiety and epilepsy. "Our findings clearly demonstrate that in experienced yoga practitioners, brain GABA levels increase after a session of yoga," said lead author Chris Streeter, MD, an assistant professor of psychiatry and neurology at BUSM and a research associate at McLean Hospital.

"This study contributes to the understanding of how the GABA system is affected by both pharmacologic and behavioral interventions and will help to guide the development of new treatments for low GABA states," said co-author Domenic Ciraulo, MD, professor and chairman of the department of psychiatry at BUSM.

"The development of an inexpensive, widely available intervention such as yoga that has no side effects but is effective in alleviating the symptoms of disorders associated with low GABA levels has clear public health advantage," added senior author Perry Renshaw, MD, PhD, director of the Brain Imaging Center at Harvard-affiliated McLean Hospital.