Interuniversity Microelectronics Centre (IMEC) has developed a 2-channel wireless EEG (electroencephalography or monitoring of brain waves) system powered by a thermo-electric generator. It uses the body heat dissipated naturally from the forehead. The wearable EEG system operates completely autonomous and maintenance-free with no need to change or recharge the batteries. This is a major advantage for body-worn sensors, a key theme in the Human++ program within the Holst Centre.

The entire system is wearable and integrated into a headband. The small size, low power consumption of only 0.8mW and autonomous operation increase the patient’s autonomy and quality of life. Potential applications are detection of imbalance between the two halves of the brain, detection of certain kinds of brain trauma and monitoring of brain activity. 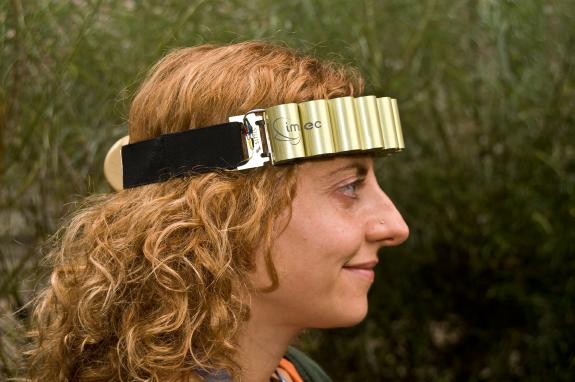 The thermoelectric generator is mounted on the forehead and converts the heat flow between the skin and air into electrical power. The generator is composed of 10 thermoelectric units interconnected in a flexible way. At room temperature, the generated power is about 2-2.5mW or 0.03mW/cm2 which is the theoretical limit of power generation on human skin. Higher power generation would cause an uncomfortable sense of cold. The EEG system is operational in less than one minute after switching on the device. 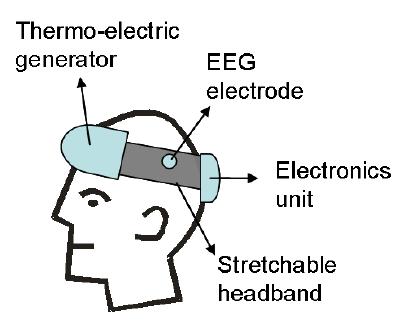 Future research targets further reduction of the power consumption of the different system components including the radio and processor. Also, a semiconductor process for manufacturing thermopiles is under development. This will allow a significant reduction of the production cost.

The system is a tangible demonstrator of the Human++ program researching healthcare, lifestyle and sport applications of body area networks. Interested parties can get more insight in this research or license the underlying technologies through membership of the program.

The Holst Centre was set up in 2005 with support from Economic Affairs of the Netherlands and the Flemish Government and is located on the High Tech Campus in Eindhoven. The center is the creation of IMEC (Flanders, Belgium) and TNO (The Netherlands) and will grow into an international recognized open R&D institute that develops generic technologies and technology platforms for autonomous wireless transducer solutions and systems-on-foil.

The activities on wireless autonomous transducer solutions in the Holst Centre are run by IMEC-NL, the sister company of the Belgian research centre IMEC. Interaction and cooperation with both academia and industry, including small- and medium-sized enterprises, enables the Holst Centre to tune its scientific strategy to the long-term corporate strategies of its partners.
Source: IMEC