The adult human body is made up of about 37 trillion cells. Microbes, mainly bacteria, outnumber body cells by 10 to 1. This huge community of microbes, called the microbiome, affects the health, development and evolution of all multicellular organisms, including humans, according to the latest craze in health supplement marketing and plenty of science papers latching onto the fad.

Symbiotic microbes can help prevent infection by disease-causing pathogens but sometimes the interaction goes the other way, with a pathogen or disease disrupting the normal community of symbiotic bacteria. In a new paper in the Proceedings of the National Academy of Sciences, a team of scientists from UC Santa Barbara say that a fungal pathogen of amphibians does just that.

Experiments with model organisms such as mice have shown that infectious pathogens can disrupt the "normal" microbiome, but the extent to which this process shapes symbiotic microbial communities during disease outbreaks in nature is largely unknown. 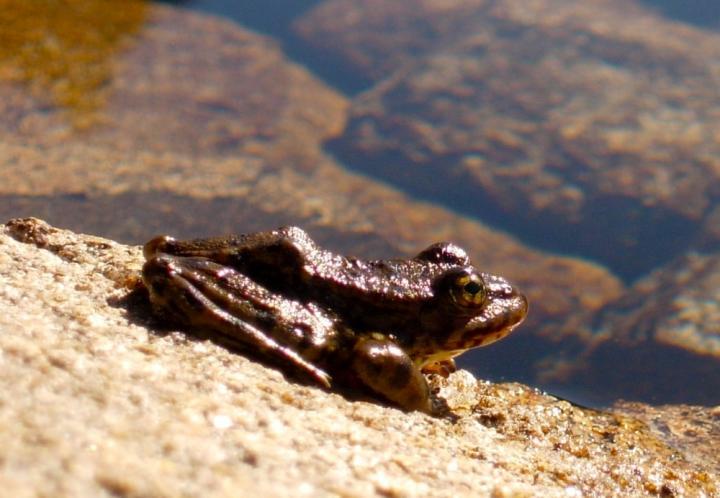 The Sierra Nevada yellow-legged frog (Rana sierrae), seen here basking at the edge of a lake, was once common in the Sierra Nevada but is now endangered. Credit: Steven Sadro

This new work, conducted by Andrea Jani, a UCSB graduate student in Cherie Briggs' lab in the Department of Ecology, Evolution and Marine Biology (EEMB), addresses a fundamental gap in disease ecology and microbiome research.

"In the California Sierra Nevada, this disease has led to the rapid extirpation of frogs from hundreds of high-elevation lakes; however, in other lakes, infected frogs of the same species are surviving and persisting with the fungus," explained Briggs, who is the Duncan and Suzanne Mellichamp Chair in Systems Biology. "Given that amphibian skin is the organ infected by Bd, there has been a lot of interest in how antifungal properties of some skin-associated bacteria may protect frogs against this fungal pathogen. In this study we focused on the flip side of this interaction -- that is, how infection with Bd can disrupt the skin microbial community."

The researchers found a remarkable consistency in the response of the microbiome to Bd infection among field populations and between the field and laboratory. Several key taxa -- a group of one or more populations of an organism or organisms -- consistently responded in the same direction to Bd infection, suggesting some predictability in the effect of Bd on the microbiome.

"What we found was that the severity of infection with Bd is strongly correlated with the composition of bacterial communities on the skin of frogs," Jani continued. "What was surprising was that across the different frog populations there was pretty striking consistency in this correlation with Bd. One of the frog populations crashed due to Bd infection; the other three populations seemed to tolerate Bd infections. So there are different disease dynamics going on, yet they have a similar relationship between the microbiome and Bd."

Still, the underlying mechanism for Bd-induced changes in the microbiome is not clear. The researchers hypothesize that the pathogen might compete directly with certain bacteria for space or resources or release compounds that negatively or positively affect certain bacterial species. Alternatively, they say, some pathogens could control immune responses of the host to favor their own growth and disrupt the normal symbiotic bacterial community.

Jani noted that some promise exists for probiotic treatments as a tool to fight the decline of frogs due to Bd, but she was careful to qualify that statement by saying that there is still a lot that scientists do not understand about either the environmental impact that might have or what the interactions are between the natural bacteria that exist on frogs and the pathogen. "We find that some taxa previously identified as having anti-Bd properties are driven to low abundances by Bd infection, which may limit their effectiveness as probiotic agents," she said.

"This study shows the importance of knowing how the many benign microbes living on and in our bodies interact with those that cause disease," said Sam Scheiner, National Science Foundation (NSF) director for the joint NSF/National Institutes of Health/United States Department of Agriculture Ecology and Evolution of Infectious Disease Program, which funded the research. "The results are important for developing responses to a disease causing amphibians to go extinct worldwide and also have implications for future studies of human health."