The researchers found that total saturated fat in the blood did not increase - and went down in most people - despite being increased in the diet when carbohydrates were reduced. Palmitoleic acid, a fatty acid associated with unhealthy metabolism of carbohydrates that can promote disease, went down with low-carb intake and gradually increased as carbs were re-introduced to the study diet.

However, increasing levels of carbohydrates in the diet during the study promoted a steady increase in the blood of a fatty acid linked to an elevated risk for diabetes and heart disease.
In the study, participants were fed six three-week diets that progressively increased carbohydrates while simultaneously reducing total fat and saturated fat, keeping calories and protein the same. 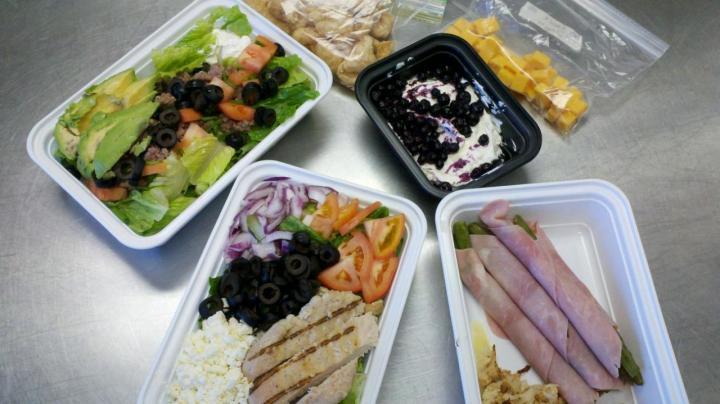 A sampling of foods provided to research participants during the three weeks that they were eating a very-low-carb diet. Credit: Ohio State University

The finding "challenges the conventional wisdom that has demonized saturated fat and extends our knowledge of why dietary saturated fat doesn't correlate with disease," said senior author of the PLOS One paper Jeff Volek, a professor of human sciences at The Ohio State University. "It's unusual for a marker to track so closely with carbohydrate intake, making this a unique and clinically significant finding. As you increase carbs, this marker predictably goes up."

When that marker increases, he said, it is a signal that an increasing proportion of carbs are being converted to fat instead of being burned as fuel. Reducing carbs and adding fat to the diet in a well-formulated way, on the other hand, ensures the body will promptly burn the saturated fat as fuel - so it won't be stored.

"When you consume a very low-carb diet your body preferentially burns saturated fat," Volek said. "We had people eat 2 times more saturated fat than they had been eating before entering the study, yet when we measured saturated fat in their blood, it went down in the majority of people. Other traditional risk markers improved, as well."

Volek and colleagues recruited 16 adults for the study, all of whom had metabolic syndrome, defined as the presence of at least three of five factors that increase the risk for heart disease and diabetes (excess belly fat, elevated blood pressure, low "good" cholesterol, insulin resistance or glucose intolerance, and high triglycerides).

After getting them to a baseline reduced-carb diet for three weeks, researchers fed the participants the exact same diets, which changed every three weeks, for 18 weeks. The diets started with 47 grams of carbs and 84 grams of saturated fat each day, and ended with 346 carb grams per day and 32 grams daily of saturated fat.

Each day's meals added up to 2,500 calories and included about 130 grams of protein. The highest-carb level represented 55 percent of daily calories, which roughly matches the estimated daily percentage of energy provided by carbs in the American diet.

Compared to baseline, there were significant improvements in blood glucose, insulin and blood pressure that were similar across diets. Participants, on average, lost almost 22 pounds by the end of the trial.

When looking at palmitoleic acid, however, the scientists found that it consistently decreased on the high-fat/low-carb diet in all participants. The fatty acid then showed a step-wise increase in concentration in the blood as carbs were progressively added to the diet. Elevated levels of palmitoleic acid in the blood have been linked to obesity and higher risk for inflammation, insulin resistance, impaired glucose tolerance, metabolic syndrome, type-2 diabetes, heart disease and prostate cancer.

The study does not address what happens to palmitoleic acid levels when high carbs are combined with a diet high in saturated fat. Instead, Volek hoped to identify the carb-intake point at which participants began to store fat.

"That turned out to be highly variable," he said. "Everyone showed increased palmitoleic acid levels as carbs increased, but values varied widely between individuals, especially at the highest carb intake. This is consistent with the idea that people vary widely in their tolerance to carbohydrates."

Participants' existing health risks were not a factor in the study because everyone ate the exact same diet for 18 weeks. Their bodies' responses to the food were the focus of the work.

Volek sees this palmitoleic acid as a potential biomarker to signal when the body is converting carbs to fat, an early event that contributes to what he calls "metabolic mayhem."

"There is no magical carb level, no cookie-cutter approach to diet, that works for everyone," he said. "There's a lot of interest in personalized nutrition, and using a dynamically changing biomarker could provide some index as to how the body is processing carbohydrates."