A team of astronomers studied the simultaneous collision of four galaxies in the galaxy cluster Abell 3827 and could trace out where the mass lies within the system and compare the distribution of the dark matter with the positions of the luminous galaxies.

Although dark matter cannot be seen, the team could deduce its location using a technique called gravitational lensing. The collision happened to take place directly in front of a much more distant, unrelated source. The mass of dark matter around the colliding galaxies severely distorted spacetime, deviating the path of light rays coming from the distant background galaxy -- and distorting its image into characteristic arc shapes.

Our current understanding is that all galaxies exist inside clumps of dark matter. Without the constraining effect of dark matter's gravity, galaxies like the Milky Way would fling themselves apart as they rotate. In order to prevent this, 85 percent of the Universe's mass [1] must exist as dark matter, and yet its true nature remains a mystery. In this study, the researchers using the MUSE instrument on ESO's VLT in Chile, along with images from Hubble in orbit,
observed the four colliding galaxies and found that one dark matter clump appeared to be lagging behind the galaxy it surrounds. The dark matter is currently 5,000 light-years (50,000 million million kilometers) behind the galaxy. I would take NASA's Voyager spacecraft 90,000,000 years to travel that far.

A lag between dark matter and its associated galaxy is predicted during collisions if dark matter interacts with itself, even very slightly, through forces other than gravity [2]. Dark matter has never before been observed interacting in any way other than through the force of gravity.

Lead author Richard Massey at Durham University, explains, "We used to think that dark matter just sits around, minding its own business, except for its gravitational pull. But if dark matter were being slowed down during this collision, it could be the first evidence for rich physics in the dark sector -- the hidden Universe all around us."

The researchers note that more investigation will be needed into other effects that could also produce a lag. Similar observations of more galaxies, and computer simulations of galaxy collisions will need to be made. 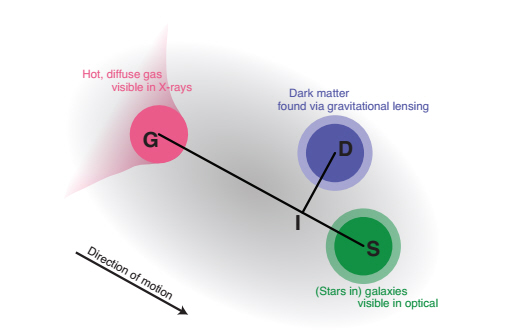 Cartoon showing the three components in each piece of substructure, and their relative offsets, illustrated by black lines. The three components remain within a common gravitational potential, but their centroids become offset due to the different forces acting on them, plus measurement noise. We assume the direction of motion to be defined by the vector from the diffuse, mainly hydrogen gas (which is stripped by ram pressure) to the galaxies (for which interaction is a rare event). We then measure the lag from the galaxies to the gas δSG, and to the dark matter in a parallel δSI and perpendicular δDI direction. Credit: arXiv

This result follows on from a recent result from the team which observed 72 collisions between galaxy clusters [3] and found that dark matter interacts very little with itself. The new work however concerns the motion of individual galaxies, rather than clusters of galaxies. Researchers say that the collision between these galaxies could have lasted longer than the collisions observed in the previous study -- allowing the effects of even a tiny frictional force to build up over time and create a measurable lag [4].

Taken together, the two results bracket the behavior of dark matter for the first time. Dark matter interacts more than this, but less than that. Massey added: "We are finally homing in on dark matter from above and below -- squeezing our knowledge from two directions."

[1] Astronomers have calculated that the total mass/energy content of the Universe is split in the proportions 68% dark energy, 27% dark matter and 5% "normal" matter. So the 85% figure relates to the fraction of "matter" that is dark.

[2] Computer simulations show that the extra friction from the collision would make the dark matter slow down. The nature of that interaction is unknown; it could be caused by well-known effects or some exotic unknown force. All that can be said at this point is that it is not gravity.

All four galaxies might have been separated from their dark matter. But we happen to have a very good measurement from only one galaxy, because it is by chance aligned so well with the background, gravitationally lensed object. With the other three galaxies, the lensed images are further away, so the constraints on the location of their dark matter too loose to draw statistically significant conclusions.

[3] Galaxy clusters contain up to a thousand individual galaxies.

[4] The main uncertainty in the result is the timespan for the collision: the friction that slowed the dark matter could have been a very weak force acting over about a billion years, or a relatively stronger force acting for "only" 100 million years.