News Staff
15 years ago, the name "Aidan" was barely a blip on the radar of Americans with new babies, ranking a lowly 324th on the Social Security Administration's list of popular baby names.

Then a popular character with that name was on the television show "Sex and the City" and though fathers dreaded that their child was going to have the same name as some other child of a mother who watched the show, it happened all across America anyway. Since then, that name has been in the top 20.

Yet not all fads are so obvious in how they arise. No one could have predicted the gluten-free or blood type diets. University of Pennsylvania communications professor Damon Centola and  physicist Andrea Baronchelli, an assistant professor at City University London, have created an information theory explanation for how social conventions - everything from acceptable baby names to standards of professional conduct - can emerge suddenly, seemingly out of nowhere, with no external forces driving their creation.

The research used an online method to test whether and how large populations come to consensus. The findings have implications for everything from understanding why different regions of the country have distinct words for the same product -- using the term soda versus pop, for example -- to explaining how norms regarding civil rights gained widespread traction in the United States. 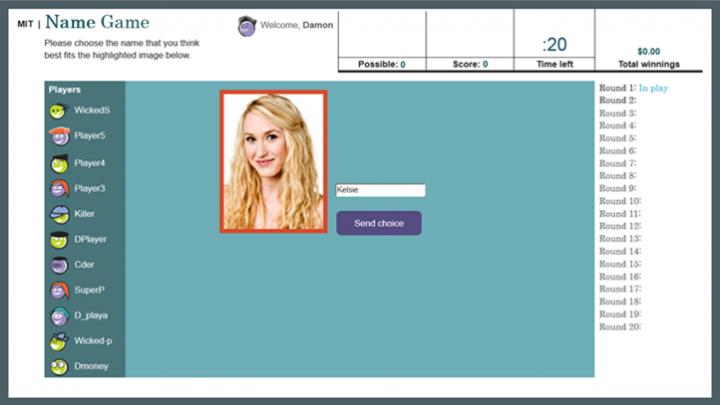 "Our study explains how certain ideas and behaviors can gain a foothold and, all of a sudden, emerge as big winners," Centola said. "It is a common misconception that this process depends upon some kind of leader, or centralized media source, to coordinate a population. We show that it can depend on nothing more than the normal interactions of people in social networks."

To understand how social norms arise, Centola and Baronchelli created a Web-based game which recruited participants from around the World Wide Web using online advertisements. In each round of the "Name Game," participants were paired, shown a photograph of a human face and asked to give it a name. If both players provided the same name, they won a small amount of money. If they failed, they lost a small amount and saw their partner's name suggestion. The game continued with new partners for as many as 40 rounds.

Though the basic structure of the game remained the same throughout the experiment, the researchers wanted to see whether changing the way that players interacted with one another would affect the ability of the group to come to consensus.

They began with a game of 24 players, each of whom was assigned a particular position within an online "social network." The participants, however, weren't aware of their position, didn't know who they were playing with or even how many other players were in the game.

Centola and Baronchelli tested the effects of three different types of networks.

In the "geographical network" version, players interacted repeatedly with their four closest neighbors in a spatial neighborhood. In the "small world network" game, participants still played with only four other players, but the partners were chosen randomly from around the network. And in the "random mixing" version, players were not limited to four other partners, instead playing each new round with a new partner selected at random from all the participants.

As the games proceeded, the researchers observed clear patterns in people's behavior that distinguished the different networks.

In the geographical and small world network games, participants easily coordinated with their neighbors, but they were not able to settle on one overall "winning" name for the population. Instead, a few competing names emerged as popular options: Sarah, Elena, Charlene and Julie all vying for dominance, for instance, with no global agreement.

In the first few rounds of the random mixing game, on the other hand, it first appeared that no winner would ever emerge, as players suggested name after name, trying to match their latest partners' choices, with very little hope of success.

Yet within just a handful of rounds, everyone agreed on a single name.

"Consensus spontaneously emerged from nothing," Centola said. "At first it was chaos, everyone was saying different things and no one could coordinate, and then all of a sudden people who had never interacted with each other were all using the same words."

The experimental results match nicely onto the researchers' mathematical model of how network structure might influence the process of social coordination. The model predicted that random mixing would allow one name choice to take off and become a big winner, a concept that in physics is known as symmetry breaking.

"We were shocked at how closely human behavior matched our models," Centola said. "But we were also nervous. It worked so perfectly the first time that we were afraid it was a fluke!"

Yet the results remained the same no matter if the game was played with 24, 48 or 96 players.

The researchers note that the consistency of the findings during repeated experiments suggests that their theory would likely scale up indefinitely - explaining, for example, how social conventions form even in very large groups like nations.

The findings also show that the process of consensus building can be manipulated by adjusting how participants in the process interact with one another.

"By making simple changes to a social network, the members of a population become more likely to spontaneously agree on a social norm," Centola said.

Such a finding might be of interest to marketers or policy makers attempting to get a particular product or behavior to surge in popularity, or political candidates hoping to soar in the polls.

In their next project, the researchers want to tweak their experiments to see how a few coordinated individuals, which Centola terms "committed minorities," can flip the global consensus from one norm to another.

Article: "The Spontaneous Emergence of Conventions," Proceedings of the National Academy of Sciences. The study was supported by the James S. McDonnell Foundation.
News Articles
More Articles All Articles
About