A giant elliptical galaxy seen in an image from the Hubble Space Telescope is the closest gravitational lens yet known, according to information released by the Hubble Heritage Project Tuesday (Feb. 6).

John Blakeslee, an assistant professor with the Department of Physics and Astronomy at Washington State University, working with colleagues from the University of Hawaii and the University of Durham in England, targeted the galaxy for a closer look by Hubble. 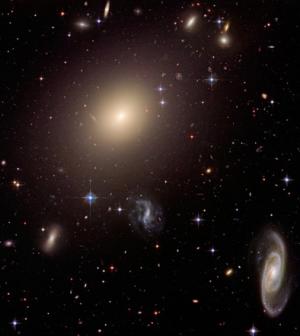 “The galaxy was well-known, but the Hubble images reveal so much more detail about it, including the unexpected finding that it’s the nearest gravitational lens,” said Blakeslee.

A gravitational lens is a celestial object so huge that it has enough mass to deflect, magnify and focus light emitted by an object that is on the opposite side of it from Earth. The result is that when viewed from Earth, the more distant object appears as an arc or ring rather than a spot or spiral. Such images are known as “Einstein rings” because Albert Einstein first predicted them.

Despite the huge number of galaxies in the universe, said Blakeslee, “gravitational lensing is a rare occurrence because it requires an almost perfect alignment of a distant galaxy with an intervening one that has enough mass to gravitationally focus the light.”

Blakeslee’s image of the galaxy has been chosen “image of the month” by the Hubble Heritage Project Team. It is visible, along with explanatory text and diagrams, at http://heritage.stsci.edu/2007/08/index.html .

The full gallery of Hubble Heritage images can be seen at http://heritage.stsci.edu/gallery/gallery.html .

In his image, the galaxy, dubbed ESO 325-G004, shows up as a diffuse area of brightness that appears to be larger and have less defined structure than other galaxies in the same frame, which have a more familiar spiral or ‘bow-tie’ appearance.

Blakeslee said the galaxy contains several hundred billion stars. Their uniform distribution gives the galaxy its diffuse elliptical appearance, in contrast to spiral galaxies, for example, in which star clusters occur in curving ‘arms’ that radiate from a central dense zone.

ESO 325-G004 is closer to Earth than any other strong gravitational lens yet discovered. Blakeslee said its proximity to Earth will allow astronomers to use other techniques, such as spectrographs on ground-based telescopes, to study how fast the stars in the galaxy are moving and estimate how much mass is in the center of the galaxy. With several lines of evidence available to them, astronomers will be able to develop a detailed understanding of the galaxy’s structure and behavior.

ESO 325-G004 is in a cluster of galaxies known as Abell S0740, which is just over 450 million light-years from Earth, in the direction of the constellation Centaurus.

The instrument used to obtain the image, the Advanced Camera for Surveys, stopped working in late January when its power system failed. Blakeslee said he has many images from Hubble yet to analyze, but the loss of the ACS will severely affect him and other astronomers who have relied on the instrument since it was installed on Hubble in 2002. He said many astronomers are now calling for NASA to repair the instrument during the final servicing mission scheduled for September, 2008.

Note: This article has been adapted from a news release issued by Washington State University.