News Staff
Why did the earliest side-scrolling games go left to right? From the 1980s on, they seemed to do that. And in the western world people write left to right. That is enough for psychologist Dr. Peter Walker of Lancaster University to speculate that there may be a fundamental bias in the way people prefer to see moving items depicted in pictures.

Did video game developers in the early 1980s obey an evolutionary mandate in designing games? An analysis of thousands of items in Google Images led Walker to believe there is widespread evidence for such a left-to-right bias and that could a possible fundamental bias for visual motion. And it may be evidenced thousands of years ago also. 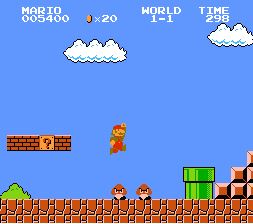 According to evolutionary psychology, this game would have been dead on arrival if Mario ran the other way. Credit: Wikipedia

However, this bias does not apply to people or objects which are stationary.

This left-to-right bias is also observed when designers italicize text to convey notions of motion and speed.

It even applies to typography in Hebrew where the reader’s eyes scan from right-to-left.

“It was the inspection of the availability of italic fonts in Hebrew that suggested an additional artistic convention for conveying motion, based on a fundamental bias, confirmed in the present study, for people to expect to see, or prefer to see, lateral movement (real or implied) in a left to right direction, rather than a right to left direction.”

Asia clearly needs to have fewer people doing science and more doing psychology or they are never going to get any credit for retroactively shaping evolution of our eyes and brains with how they write. At least the Japanese developers of Super Mario Bros. knew to defy their own culture and obey the evolutionary need to be left-to-right.