News Staff
The Universe began about 13.8 billion years ago and evolved from an extremely hot, dense and uniform state to the rich and complex cosmos of galaxies, stars and planets we see today. The key source of information about that history is the Cosmic Microwave Background - CMB - the legacy of light emitted only 380 000 years after the Big Bang.

Astronomers have been searching searching for a particular signature of cosmic ‘inflation’ – a very brief accelerated expansion that, according to current theory, the Universe experienced when it was only the tiniest fraction of a second old. This signature would be seeded by gravitational waves, tiny perturbations in the fabric of space-time, that astronomers believe would have been generated during the inflationary phase.

These perturbations should leave an imprint on another feature of the cosmic background: its polarization. When light waves vibrate preferentially in a certain direction, we say the light is polarized and the CMB is polarized, exhibiting a complex arrangement across the sky. This arises from the combination of two basic patterns: circular and radial (known as E-modes), and curly (B-modes).  Different phenomena in the Universe produce either E- or B-modes on different angular scales and identifying the various contributions requires extremely precise measurements. It is the B-modes that could hold the prize of probing the Universe’s early inflation. 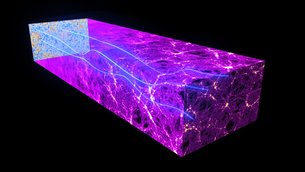 So in early 2014, when researchers of the BICEP2 collaboration presented results based on observations of the polarized CMB on a small patch of the sky performed in 2010–12, and found curly B-modes in the polarization observed over stretches of the sky a few times larger than the size of the full Moon, people were excited. The BICEP2 team presented evidence favoring the interpretation that this signal originated in primordial gravitational waves, sparking an enormous response in the academic community and general public.

However, there is another contender in this game that can produce a similar effect: interstellar dust in our galaxy, and a joint analysis of data from ESA’s Planck satellite and the ground-based BICEP2 and Keck Array experiments has found no conclusive evidence of primordial gravitational waves. That is science speak for 'the results were wrong'.

The Milky Way is pervaded by a mixture of gas and dust shining at similar frequencies to those of the CMB, and this foreground emission affects the observation of the most ancient cosmic light. Very careful analysis is needed to separate the foreground emission from the cosmic background.

“When we first detected this signal in our data, we relied on models for Galactic dust emission that were available at the time,” says John Kovac, a principal investigator of BICEP2 at Harvard University, in the USA.

“These seemed to indicate that the region of the sky chosen for our observations had dust polarisation much lower than the detected signal.”

The two ground-based experiments collected data at a single microwave frequency, making it difficult to separate the emissions coming from the Milky Way and the background.

On the other hand, Planck observed the sky in nine microwave and sub-millimetre frequency channels, seven of which were also equipped with polarisation-sensitive detectors. By careful analysis, these multi-frequency data can be used to separate the various contributions.

The BICEP2 team had chosen a field where they believed dust emission would be low, and thus interpreted the signal as likely to be cosmological.

However, as soon as Planck’s maps of the polarised emission from Galactic dust were released, it was clear that this foreground contribution could be much higher than previously expected.

In fact, in September 2014, Planck revealed for the first time that the polarised emission from dust is significant over the entire sky, and comparable to the signal detected by BICEP2 even in the cleanest regions.

So, the Planck and BICEP2 teams joined forces, combining the satellite’s ability to deal with foregrounds using observations at several frequencies – including those where dust emission is strongest – with the greater sensitivity of the ground-based experiments over limited areas of the sky, thanks to their more recent, improved technology. By then, the full Keck Array data from 2012 and 2013 had also become available.

“This joint work has shown that the detection of primordial B-modes is no longer robust once the emission from Galactic dust is removed,” says Jean-Loup Puget, principal investigator of the HFI instrument on Planck at the Institut d’Astrophysique Spatiale in Orsay, France.

“So, unfortunately, we have not been able to confirm that the signal is an imprint of cosmic inflation.”