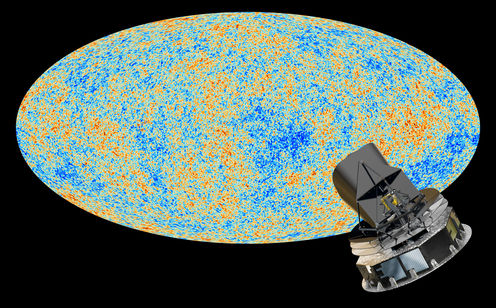 Planck telescope and the Cosmic microwave background. ESA and Planck, CC BY

By Robert Crittenden, University of Portsmouth

In March, scientists working on the BICEP2 experiment, a microwave telescope based at the South Pole, announced that they had seen gravity waves from the early universe, created just after the Big Bang. Ever since the announcement, the cosmological community has been excitedly debating the implications of their detection.

However, their claims have been called into question by other cosmologists. There is growing evidence that at least part of what BICEP2 saw might be much more mundane, coming instead from dust in our own Milky Way galaxy.

At the heart of the discussion is the theory of “cosmic inflation”, which suggests the universe underwent a period of very fast expansion, when a microscopic region was stretched to be larger than our observable universe. Inflation provides a mechanism for explaining why matter is spread out evenly throughout the universe, even though some of it forms large lumps in the form of galaxies.

However, the theory also predicts the creation of gravitational waves in the process of inflation. This is what BICEP2 – which stands for the Background Imaging of Cosmic Extragalactic Polarisation telescope – was built to seek out. The March results from BICEP2 were based on observations of remnant light from the big bang, known as the cosmic microwave background (CMB).

CMB observations have always been troubled by noise in the form of foreground signals like glowing dust, which was left behind by dying stars in interstellar space. However, the strength of these competing signals depends on the wavelength of light that we observe. Cosmologists have been fortunate that, when we look away from our galaxy and in the right microwave wavelengths, these foreground signals are smaller than the radiation from the early universe. Controlling for these foregrounds is why satellite experiments, such as European Space Agency’s Planck mission, have played a crucial role in improving our understanding of the early universe.

The BICEP2 team made their claim based on seeing a particular kind of pattern, or handedness, in the direction of the CMB polarisation, called B-modes. (The CMB is linearly polarised, just as sunlight is if reflected off of a flat surface.) Their case for B-modes seemed very strong, and few questioned that authenticity of the signals. However, what is in doubt is whether the B-modes they have seen actually imply the existence of primordial gravity waves.

In order to see the CMB signals produced by gravity waves, B-mode experiments must be much more sensitive. However, at this sensitivity, our understanding of foreground signals that could contaminate the actual signal is much poorer. In particular, it is possible that the B-modes seen by BICEP2 could actually be coming from galactic dust. This viewpoint has been supported by a study of the dust B-mode signal obtained by the Planck space telescope.

BICEP2 only observed in one wavelength, which made it difficult for them to prove the B-modes they saw were truly from gravitational waves. To compensate for this, BICEP2 focused on a part of the sky where the dust signal was predicted to be smaller than the gravity wave signal – and so that is why they interpreted their B-modes as evidence of gravity waves.

However, using new data taken at wavelengths dominated by dust, the Planck team has shown that the dust models BICEP2 used were inadequate and the dust B-modes could actually be comparable to the signal that BICEP2 found. This is not to say that BICEP2 didn’t see some gravity waves, as the models are still uncertain, but it is clear that we need to understand dust better before we can have confidence that we have seen the primordial gravity waves.

To fully resolve this uncertainty, we must compare in detail B-modes seen in different microwave wavelengths. This is already happening, as BICEP2 and Planck are now collaborating to see how similar the dust maps from Planck are to those from BICEP2. The BICEP2 team are also now observing the same part of sky with new set of telescopes, which are sensitive to two wavelengths and will provide a way to filter out the dust signal.

For the moment at least, the detection of primordial gravity waves seems to be clouded by interstellar dust. BICEP2’s interpretation of what they saw seems to have been premature. But the opportunity is there to soon settle the question much more definitively and when the dust finally settles, we may be left with much more confidence that the elusive gravity waves have finally been seen.

Robert Crittenden, Reader in Cosmology at University of Portsmouth, does not work for, consult to, own shares in or receive funding from any company or organization that would benefit from this article, and has no relevant affiliations.