News Staff
Scientists have developed a new biosensor that allows them to see, in real time, what happens when a plant’s defenxe system swings into action.

When plants come under attack internal alarms signal and their defense mechanisms swing into action. For the first time, plant scientists have imaged, in real time, what happens when plants beat off the bugs and respond to disease and damage.

Malcolm Bennett, Professor in Plant Science at The University of Nottingham and Director of the Centre for Plant Integrative Biology, said, “Understanding how plants respond to mechanical damage, such as insect attack, is important for developing crops which cope better under stress.” 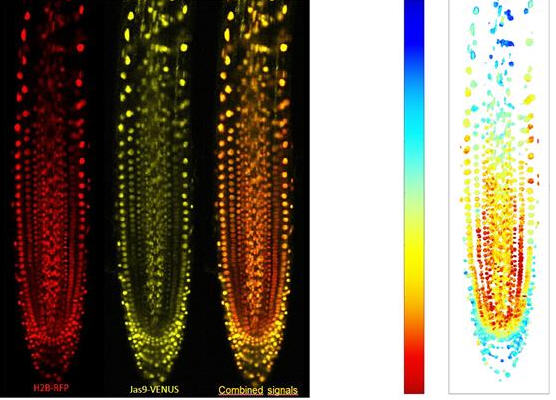 Their research focused on the plant hormone jasmonic acid which is part of the plant’s alarm system and defense mechanism. Jasmonic acid is released during insect attack and controls the response to damage. Disease can also trigger jasmonic acid - so it’s a general defense compound.

Professor Bennett said: “We have created a special fluorescent protein - Jas9-VENUS - that is rapidly degraded after jasmonic acid is produced. This allowed us to monitor where jasmonic levels are increased when the fluorescent signal is lost.”

Using a blade to damage a leaf the research team mimicked an insect feeding. With the fluorescent protein they were able to image how damage to a leaf quickly results in a pulse of jasmonic acid that reaches all the way down to the tip of the root, at a speed of more than a centimeter per minute. Once this hormone pulse reaches the root it triggers more jasmonic acid to be produced locally, amplifying the wounding signal and ensuring other parts of the plant are prepared for attack.

Professor Bennett said: “Jasmonic acid triggers the production of defense compounds like protease inhibitors to stop the insect being able to digest the plant proteins – the plant becomes indigestible and the insect stops eating it.”

Laurent Laplaze, a group leader at IRD (Institut de recherche pour le développement) in Montpellier described the new biosensor used to pinpoint what happens when plants are damaged. He said, “The Jas9-VENUS biosensor responds to changes in jasmonic acid levels in plant cells within a few minutes. Our new biosensor now allows us to see exactly where jasmonic acid is being perceived by the plant, but in a quantifiable way.”

The new biosensor can be used to understand how the plant can coordinate a defense response. Teva Vernoux, a CNRS group leader at the Ecole Normale Supérieure in Lyon, said, “The amazing sensitivity of our new biosensor allows us to follow in real time how jasmonic acid levels are modified in a tissue when a mechanical damage occurs in another tissue some distance away. This really opens the possibility to understand changes in the physiology at the whole plant level upon stress or damage.”