Is chimpanzee intergroup aggression like primitive warfare, an adaptive strategy that gives the perpetrators an edge, or is it the consequence of human activities, such as provisioning - artificial feeding - by researchers or habitat destruction?

A new study of the pattern of intergroup aggression in chimpanzees and pygmy chimpanzees (bonobos), their close relatives, finds that human impact isn't the culprit. 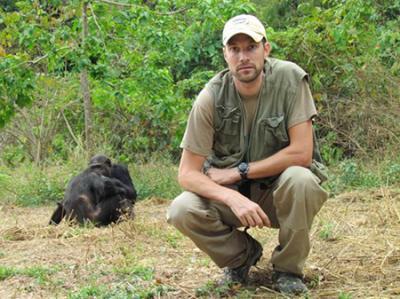 The authors say this study represents the first effort to test the human impact versus adaptive strategies hypothesis, which views killing as an evolved tactic to increase access to territory, food, mates or other benefits. Analysis of 152 lethal attacks finds that it is clear that lethal aggression directed toward members of other groups is part of the natural behavioral repertoire of chimpanzees—sometimes chimpanzees kill each other, regardless of human impact. However, bonobos were not observed to kill other bonobos, whatever the level of human impact.

"This study debunks the idea that lethal aggression among wild chimpanzees is an aberrant behavior caused by human disturbances, like artificial feeding or habitat loss," says Arizona State University anthropologist Ian Gilby, co-director of the long-term Gombe chimpanzee database for the Jane Goodall Institute Research Center and a coauthor on the paper in Nature.

"Gombe is longest running of wild chimpanzee study sites," says Gilby, "and is critically important for addressing questions about the impact of 'provisioning.'" The practice of provisioning was discontinued at Gombe many years ago due to risk of infecting chimpanzees with human diseases. Concurrent with the published study in Nature, Joan Silk, an ASU scientist who studies primate behavioral ecology, evolution and sociality, wrote a companion piece, "The evolutionary roots of lethal conflict" for the publication's "News and Views" column.

In it, Silk points out that the debates about the origins and prevalence of human warfare may be echoed in the search for the answer to chimpanzee adaptation versus human disturbance question. In the article, she says that "perceptions of behavior of primates, particularly chimpanzees, are often distorted" so that "morally desirable features, such as empathy and altruism, have deep evolutionary roots, whereas undesirable features, such as group-level violence and sexual coercion, do not."

The data, however, she says, show that "there are some circumstances in which the benefits of lethal aggression exceed the costs for chimpanzees, nothing more. Humans are not destined to be warlike because chimpanzees sometimes kill their neighbors."