Usually blind sages revealing the secrets of the universe are Asian. Scotland doesn't get enough respect that way but a centipede is defying the stereotype.

Arthropods are one of Earth's real success stories, with more species than any other animal phylum. Genome sequencing has been skewed towards the more popular insects, and even an arachnid and a crustacean, and now finally the myriapods (centipedes and millipedes) are emerging from the dark.

Scientists have now sequenced the genome of the centipede Strigamia maritima, enabling them to reconstruct many features of the genetic make-up of the ancestral arthropod that lived more than half a billion years ago. In a report publishing November 25 in the open access journal PLOS Biology, the team reveals our first glimpse of a myriapod genome and uses it to explore the genetic basis of centipede biology and of the incredible diversification of arthropods. 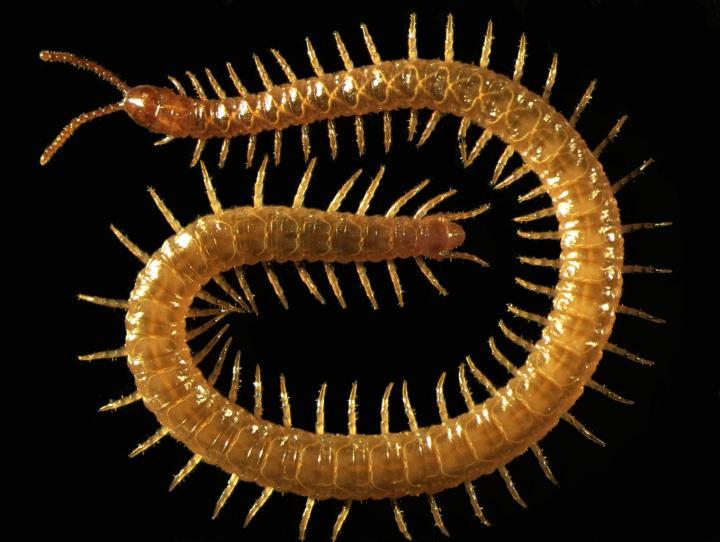 Myriapods probably arose from marine ancestors that invaded the land more than 400 million years ago. They have a large number of near-identical segments, each bearing one or two pairs of legs. Despite their name, centipedes never have a hundred legs (the number of pairs is always odd), though Strigamia itself gets close with 45 to 51 pairs.

Although most of us are familiar with centipedes in gardens and woodland, Strigamia lives in coastal habitats, and like most centipedes is a venomous carnivore.

Over a decade ago a team from Cambridge University, headed by Professor Michael Akam, started making the long trip up to Brora on the coast of the Moray Firth in Scotland to lie on their bellies on the beach, digging under the pebbles to hunt out their favorite centipede.

Strigamia is favored by scientists for the accessibility of its nests, from which embryos can be gathered for study - making the species an ideal candidate for obtaining the first genome sequence from a myriapod, and opening the door to new understandings of the developmental biology and ecology of these secretive animals.

Ariel Chipman (Hebrew University of Jerusalem) and David Ferrier (University of St. Andrews) are lead co-authors of the report.

"This genome of Strigamia has proved to be particularly valuable in deducing the content of important gene families in the ancestral arthropod, this ancestor then being the starting point for the evolution of the huge diversity of arthropods that we currently see today," said Ferrier. "There has been a high turn-over in arthropod gene and genome organization, with lots of rearrangements and plenty of gene losses during the evolution of animals like the insects. The sorts of reconstructions that have been made possible by this new myriapod genome provide a foundation for delving more deeply into the biology of these genetic changes to see how they were linked to the diversification of the incredible range of body forms and modes of life that we now find in the arthropods."

One of the most surprising findings is that these centipedes appear to have lost the genes encoding all of the known light receptors used by animals, as well as the genes controlling circadian rhythm - the body's internal clock.

"Strigamia live underground and have no eyes, so it is not surprising that many of the genes for light receptors are missing, but they behave as if they are hiding from the light. They must have some alternative way of detecting when they are exposed," says Akam. "It's curious, too, that this creature appears to have no body clock - or if it does, it must use a system very different to other animals."