News Staff
General Atomics, which operates the DIII-D National Fusion Facility for the U.S. Department of Energy, and the Department of Energy's Princeton Plasma Physics Laboratory (PPPL) have made a breakthrough in understanding how potentially damaging heat bursts inside a fusion reactor can be controlled.

The experiments with the DIII-D Fusion Facility, a tokamak in San Diego, represent a key step in predicting how to control heat bursts in future fusion facilities. Researchers have found that tiny magnetic fields applied to the device can create two distinct kinds of response, rather than just one response as previously thought.

The new response produces a ripple in the magnetic field near the plasma edge, allowing more heat to leak out at just the right rate to avert the intense heat bursts. Researchers applied the magnetic fields by running electrical current through coils around the plasma. Pickup coils then detected the plasma response, much as the microphone on a guitar picks up string vibrations. 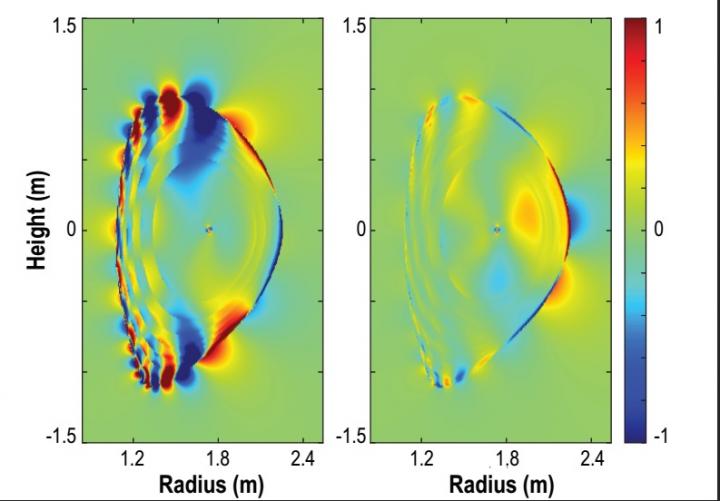 Simulation of a cross-section of a DIII-D plasma responding to tiny magnetic fields. The left image models the response that suppressed the ELMs. Credit: General Atomics

The studies build upon previous work pioneered on DIII-D showing that these intense heat bursts - called "ELMs" for short - could be suppressed with tiny magnetic fields. These tiny fields cause the edge of the plasma to smoothly release heat, thereby avoiding the damaging heat bursts. But until now, scientists did not understand how these fields worked. "Many mysteries surrounded how the plasma distorts to suppress these heat bursts," said Carlos Paz-Soldan, a General Atomics scientist and lead author of the first of the two papers that report the seminal findings back-to-back in the same issue of Physical Review Letters this week.

The second result, led by PPPL scientist Raffi Nazikian, who heads the PPPL research team at DIII-D, identified the changes in the plasma that lead to the suppression of the large edge heat bursts or ELMs. The team found clear evidence that the plasma was deforming in just the way needed to allow the heat to slowly leak out. The measured magnetic distortions of the plasma edge indicated that the magnetic field was gently tearing in a narrow layer, a key prediction for how heat bursts can be prevented. "The configuration changes suddenly when the plasma is tapped in a certain way," Nazikian said, "and it is this response that suppresses the ELMs."

The new results suggest further possibilities for tuning the magnetic fields to make ELM-control easier. These findings point the way to overcoming a persistent barrier to sustained fusion reactions. "The identification of the physical processes that lead to ELM suppression when applying a small 3D magnetic field to the inherently 2D tokamak field provides new confidence that such a technique can be optimized in eliminating ELMs in ITER and future fusion devices," said Mickey Wade, the DIII-D program director.

Both papers are upcoming in Physical Review Letters.
News Articles
More Articles All Articles
About