News Staff
A new operating mode for fusion power avoids instabilities in the plasma that place a heavy load on the vessel wall and to remove heat and particles from the plasma more gently.

The aim of fusion energy is to tame atomic nuclei the way the sun does. Because the fusion fire only ignites at temperatures above 100 million degrees, its low-density hydrogen plasma fuel must not come into contact with the colder vessel walls. That is achieved using magnetic fields inside a ring-shaped vacuum chamber. The international experimental reactor ITER, currently being built in Cadarache, France,will show feasibility by generating fusion power of 500 megawatts.

A tokamak-type fusion plant is intended to develop operating modes. In order for sufficient fusion reactions to take place, the ultra-thin plasma floating in a magnetic cage must be extremely hot in the center: at least 100 million degrees Celsius. At the edge, however, it should be as cold as possible so as not to overload the walls of the vacuum vessel. At the "divertor", where the plasma has wall contact, a special magnetic field directs the outer edge of the ring-shaped plasma onto water-cooled plates at the bottom of the vessel, the divertor plates. This allows impurities to be removed from the plasma. At the same time, the hot inner area of the plasma is effectively separated from the colder envelope. This is because the boundary layer formed by the divertor field envelops the central plasma like a warming jacket – the prerequisite for good thermal insulation.

To enable the divertor to perform these functions, additional loads like edge-localized modes (ELMs) need to be avoided. ELMs are one of the disturbances of the plasma confinement induced by the complex interaction between the charged plasma particles and the confining magnetic field. In this process, the edge plasma loses its confinement for a short time and periodically throws plasma particles and energies outwards onto the divertor plates. Typically, one-tenth of the total energy content can thus be ejected abruptly. While the current generation of medium-sized fusion plants can easily cope with this, the divertor in large-scale facilities such as ITER or a future power plant would not be able to withstand this strain. 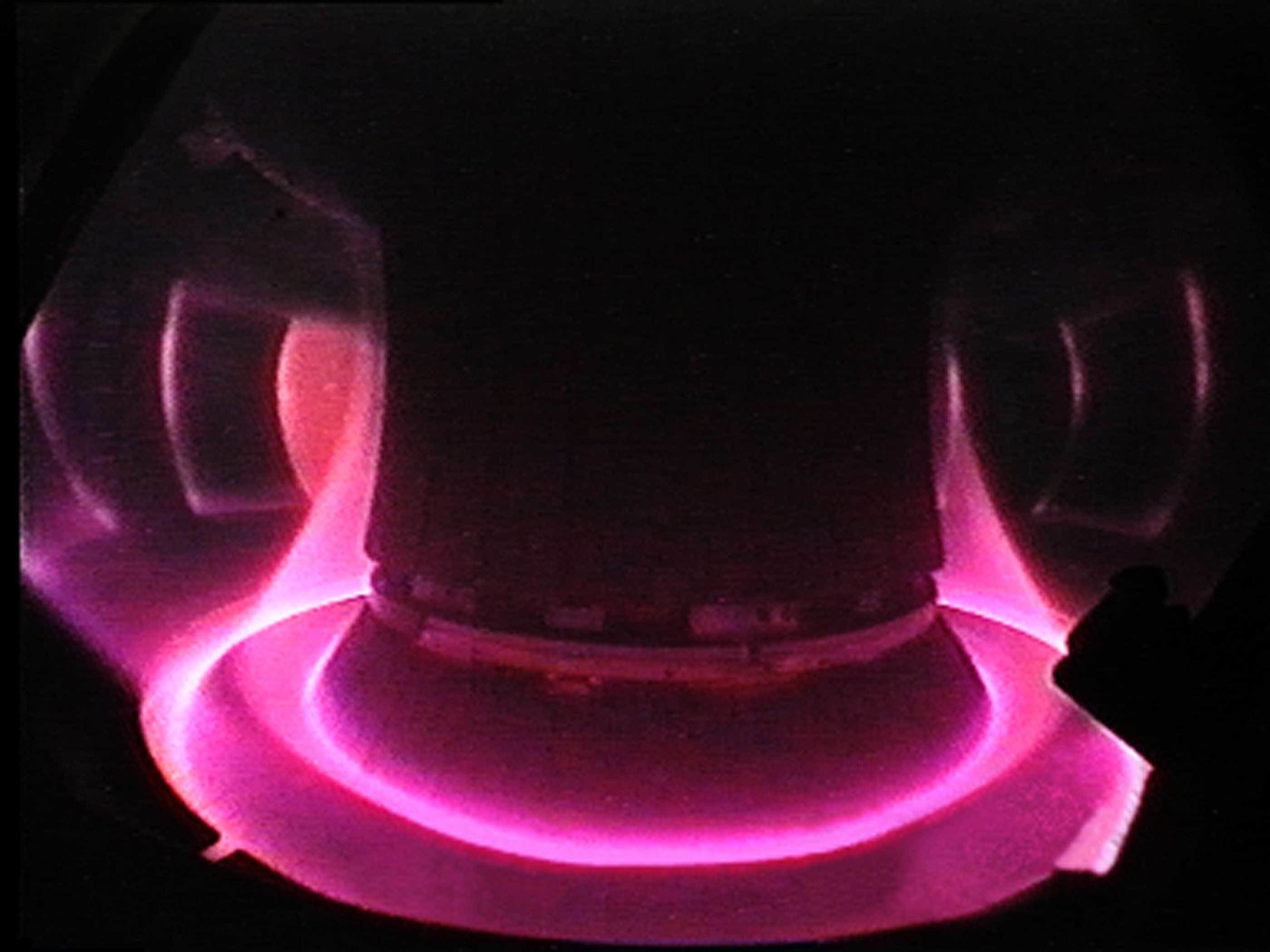 View into the plasma of the ASDEX Upgrade fusion plant. The confining magnetic field directs the boundary layer of the plasma onto specially equipped plates at the bottom of the plasma vessel, the divertor plates. Photo: IPP

Methods for attenuating or suppressing ELMs, by means of magnetic control coils, have already been successfully developed. However, the plasma edge of the test reactor ITER or a future power plant cannot be simulated completely in smaller facilities so it is not entirely certain that these techniques will work just as reliably in a large plant. Experiments recently showed that this is different for an alternative, previously less considered method, which applies at the very edge of the plasma.

If it is possible to adjust the correct plasma shape there via the magnetic field, and at the same time – by injecting hydrogen – to ensure a sufficiently high particle density at the plasma edge, ELMs cannot develop. Instead, many small particle bursts appear. They flatten the pressure profile at the plasma edge again and again before a too steep pressure increase can discharge in an ELM instability: In up to 500 small pulses per second, the power from the plasma arrives quasi-continuously at the divertor plates – without impairing the good thermal insulation of the central plasma.

In the meantime, ASDEX Upgrade has been able to verify experimentally that the new plasma scenario is compatible with all the important control methods for the plasma.
News Articles
More Articles All Articles
About