Cosmic Microwave Background And The Dynamic Side Of The Universe
By News Staff | February 11th 2015 07:30 AM | Print | E-mail

The Planck collaboration has released data from four years of observation by the European Space Agency (ESA)'s Planck spacecraft. The aim of the Planck mission is to study the Cosmic Microwave Background, the light left over from the Big Bang.

The measurements, taken in nine frequency bands, were used to map not only the temperature of the radiation but also its polarization - a property of light like color or direction of propagation - which provides additional information about the very early Universe, around 380,000 years old, and our Galaxy's magnetic field.

From 2009 to 2013, ESA's Planck spacecraft observed the Cosmic Microwave Background (CMB), the oldest light in the Universe. The legacy of this project comprises a huge amount of invaluable data of key importance for several fields in astrophysics. It includes a map of the polarized emission from interstellar dust, a catalog of 13,188 cold, dense clouds in our Galaxy and of 1,653 galaxy clusters detected via their interaction with the CMB, as well as information about the way in which matter has gradually clustered together over the last ten billion years, and, last but not least, a full-sky map of the CMB.

This map enables researchers to view the distribution of matter 380,000 years after the Big Bang. Thanks to this data, our knowledge of the early Universe has taken on new momentum, making it possible to explore every aspect of the cosmological model. 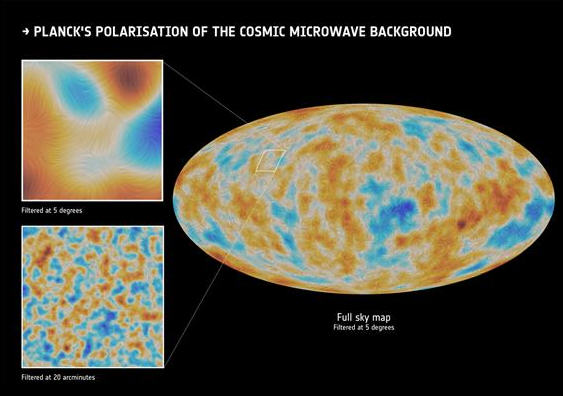 On the above map, the colors show the deviations of the temperature of the Cosmic Microwave Background from its mean value. The colder blue regions and the warmer red regions provide evidence of variations in the density of matter early in the history of the Universe. The map also provides underlying evidence of the direction and intensity of polarization.

They form an imprint that shows the motion of matter, which falls in towards the densest regions and escapes from regions that are less dense. These structures can be observed in the sky at different scales.

The new data allows the physical content of the Universe to be determined precisely:

The time at which the first stars were born can now also be better determined, and is now estimated to be around 550 million years after the Big Bang. Lastly, thanks to the very high precision of the data, the researchers have been able to calculate the current rate at which space is expanding, which gives the Universe an estimated age of 13.77 billion years.

However, it is the data relating to the polarization of the CMB that has really boosted cosmologists' ability to test a number of hypotheses about the Universe, both as regards the physical laws that govern it and the properties of its constituents, such as neutrinos and dark matter. In addition, the new catalog of galaxy clusters has made it possible to refine the cosmological parameters that govern the formation of structures in the Universe, such as the mass of neutrinos and the epoch of re-ionization [2].

Today, this data provides researchers across the world with a particularly sound basis for exploring the earliest epochs, shortly after the Big Bang, and especially the phenomenon known as cosmic inflation, which is thought to have transformed what was probably an initially highly chaotic Universe into a relatively homogeneous medium peppered with tiny density fluctuations that eventually led to the formation of galaxies.

In our Galaxy, interstellar space is not empty. It contains gas and tiny grains of dust, the matter from which new stars and their planets are formed throughout the Galaxy. Interstellar dust emits radiation at the wavelengths observed by the Planck spacecraft. Interstellar space, just like the Earth and the Sun, is pervaded by a magnetic field. The magnetic field tends to align the grains, which polarizes their radiation. For the first time, Planck measured this polarization over the whole sky.

The discovery of our Galaxy's magnetism is linked to that of the high-energy particles known as cosmic rays. Without such a magnetic field, these particles, accelerated by supernovæ to speeds close to that of light, would rapidly escape from the Galaxy. The magnetic force retains them, while the magnetic field itself is controlled by interstellar matter. Matter, magnetic field and cosmic rays interact with one another, constituting a dynamic system.

Although the important role of the magnetic field in this trio has long been known, the data available to study it was still too fragmentary. Astrophysicists have long sought to understand how gravity overcomes the magnetic field to trigger the formation of stars.

The Planck mission has now obtained two completely new maps of the polarization of the sky, one of the synchrotron emission [3] of the electrons in cosmic radiation, and the other of the emission from interstellar dust.

The data reveals the structure of the Galactic magnetic field in unprecedented detail. The polarization of both the synchrotron emission and the emission from the dust indicates the direction of the magnetic field. Interpreting the observations is tricky, since we only have access to the projection of a structure, which, by definition, is three-dimensional. The data needs to be compared with models and numerical simulations in order to understand the interaction between matter and the magnetic field.

1) A propagating light beam actually results from tiny vibrations of an electric field and a magnetic field. When the electric field oscillates preferentially in a given direction we say that the light is polarized. Certain physical phenomena produce polarized light naturally, which is the case for the Cosmic Microwave Background. The polarization is measured by two instruments on board the spacecraft in seven channels ranging from 30 to 353 GHz. Information is currently available for four out of the seven channels: in the three channels of the low-frequency instrument and in the 353 GHz channel of the high-requency instrument.

2) The primordial Universe was ionized: electrons and protons were not combined. The emission of the CMB corresponds to the formation of atoms: the Universe became neutral. However, from the study of quasars it is known that today the Universe is ionized, and has been so for over 12 or 13 billion years. Thus between 380,000 and 1 billion years ago the Universe was reionized..