News Staff
A microstimulator and geomagnetic compass attached to the brains of blind rats allows them to spontaneously learn to use new information about their location and navigate through a maze nearly as well as normally sighted rats.

The findings show the incredible flexibility of the mammalian brain but also suggest that a similar kind of neuroprosthesis could help blind people walk freely through the world.

What they set out to do was to restore the blind rats' allocentric sense rather than vision - that sense is what allows animals and people to recognize the position of their body within the environment. What would happen, the researchers asked, if the animals could "see" a geomagnetic signal? Could that signal fill in for the animals' lost sight? Would the animals know what to do with the information? 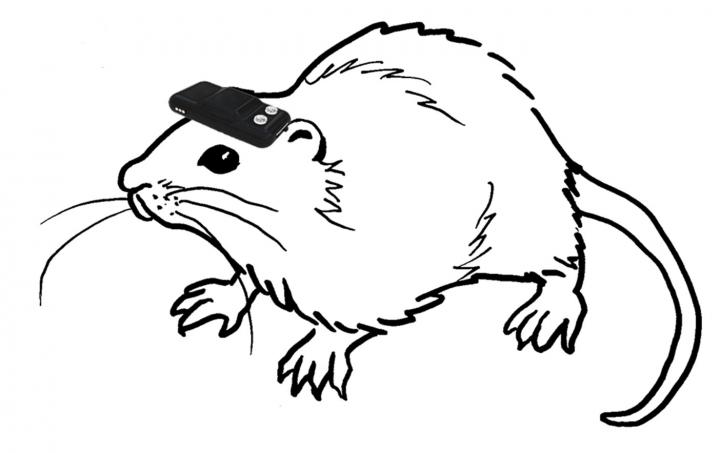 The head-mountable geomagnetic sensor device the researchers devised allowed them to connect a digital compass (the kind you'd find in any smart phone) to two tungsten micro-electrodes for stimulating the visual cortex of the brain. The very lightweight device also allowed the researchers to turn the brain stimulation up or down and included a rechargeable battery.

Once attached, the sensor automatically detected the animal's head direction and generated electrical stimulation pulses indicating which direction they were facing--north or south, for instance.

The "blind" rats were then trained to seek food pellets in a T-shaped or a more complicated maze. Within tens of trials, the researchers report, the animals learned to use the geomagnetic information to solve the mazes. In fact, their performance levels and navigation strategies were similar to those of normally sighted rats. The animals' allocentric sense was restored.

"The most remarkable point of this paper is to show the potential, or the latent ability, of the brain," says Yuji Ikegaya of the University of Tokyo. "That is, we demonstrated that the mammalian brain is flexible even in adulthood--enough to adaptively incorporate a novel, never-experienced, non-inherent modality into the pre-existing information sources."

In other words, he says, the brains of the animals they studied were ready and willing to fill in "the 'world' drawn by the five senses" with a new sensory input.

"We were surprised that rats can comprehend a new sense that had never been experienced or 'explained by anybody' and can learn to use it in behavioral tasks within only two to three days," Ikegaya says.

The findings suggest one very simple application: to attach geomagnetic sensors to the canes used by some blind people to get around. More broadly, the researchers expect, based on the findings, that humans could expand their senses through artificial sensors that detect geomagnetic input, ultraviolet radiation, ultrasound waves, and more. Our brains, it appears, are capable of much more than our limited senses allow.

"Perhaps you do not yet make full use of your brain," Ikegaya says. "The limitation does not come from your lack of effort, but it does come from the poor sensory organs of your body. The real sensory world must be much more 'colorful' than what you are currently experiencing."