News Staff
The chemical messenger dopamine, colloquially called the 'happiness hormone', is important outside social psychology articles on Valentine's Day also; it has been linked to motivation and motor skills and may help neurons with difficult cognitive tasks.  Researchers have found how dopamine influences brain cells while processing rules.

The effects of dopamine become very clear when the brain gets too little of it, as is the case with Parkinson’s disease. A dopamine imbalance leads to varied neurological disruptions – particularly movement – but also mental abilities. Our key cognitive center, the prefrontal cortex, which we use for abstract thought, rule-based decisions and logical conclusions, is intensively supplied with dopamine. Despite its major medical significance, we know little about dopamine’s effects on information processing by neurons in the healthy brain.

To test this, the researchers trained rhesus monkeys to solve “greater than” and “less than” math problems. From other recent studies, the researchers knew that certain neurons in the prefrontal cortex answer such questions – one half of these “rule cells” was only activated when the “greater than” rule applied, and the other half was only activated when the “less than” rule applied. 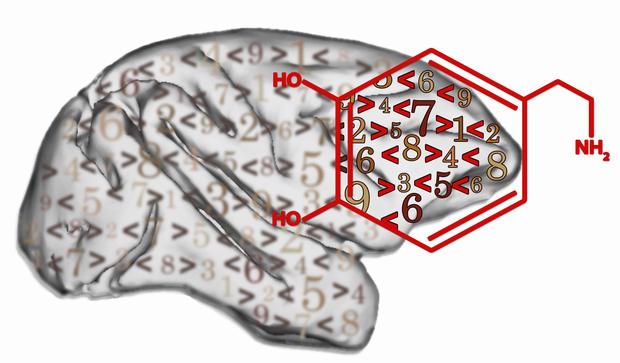 Nerve cells in the prefrontal cortex (marked) can process “greater than” and “less than” rules better under the influence of dopamine. Image: LS Tierphysiologie/Tübingen University

Meanwhile, physiologically small amounts of various substances were being discharged near the relevant cells. These substances can have the same effect as dopamine – or the opposite effect – and could be adsorbed by dopamine-sensitive neurons. The surprising result was that stimulation of the dopamine system allowed the “rule cells” to perform better and to more clearly distinguish between the “greater than” and “less than” rules. Dopamine had a positive effect on the “rule cells’” quality of work.

The study provides new insight into how dopamine influences abstract thought processes needed, for instance, to apply simple mathematical rules. “With these findings, we are just starting to understand how nerve cells in the prefrontal cortex produce complex, goal-directed behavior,” says Torben Ott of Universitaet Tübingen's Institute for Neurobiology.

Along with a better understanding of the foundations of information processing in this important part of the brain, the results could have medical significance.

“These new insights help us to better interpret the effects of certain medicines which may be used for instance in cases of severe psychological disturbance,” says co-author Professor Andreas Nieder, “because such medications influence the dopamine balance in the prefrontal cortex in ways we do not understand well to date.”