Extraterrestrial Dust On The Ocean Floor At Odds With Supernovae Hypotheses
By News Staff | January 20th 2015 08:13 AM | Print | E-mail

News Staff
Scientists have analyzed extraterrestrial dust hat has settled on ocean floors to determine the amount of heavy elements created by the massive explosions. The dust is thought to be from supernovae, exploding stars way beyond our solar system, and their conclusions are at odds with current theories of supernovae, in which some of the materials essential for human life, such as iron, potassium and iodine are created and distributed throughout space.

The researchers studied plutonium-244 which serves as a radioactive clock by the nature of its radioactive decay, with a half-life of 81 million years. Galactic dust from the last 25 million years has settled on the ocean and the work found there is much less of the heavy elements such as plutonium and uranium than expected. 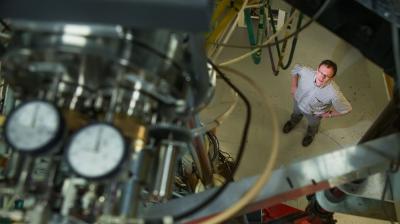 "Any plutonium-244 that existed when the earth formed from intergalactic gas and dust over four billion years ago has long since decayed,"  said lead researcher Dr. Anton Wallner, from the Research School of Physics and Engineering at The Australian National University (ANU).
"So any plutonium-244 that we find on earth must have been created in explosive events that have occurred more recently, in the last few hundred million years."

The team analyzed a 10 centimeter-thick sample of the earth's crust, representing 25 million years of accretion, as well as deep-sea sediments collected from a very stable area at the bottom of the Pacific Ocean. "We found 100 times less plutonium-244 than we expected," Wallner said. "It seems that these heaviest elements may not be formed in standard supernovae after all. It may require rarer and more explosive events such as the merging of two neutron stars to make them."

The fact that these heavy elements like plutonium were present, and uranium and thorium are still present on earth suggests that such an explosive event must have happened close to the earth around the time it formed, says Wallner.

"Radioactive elements in our planet such as uranium and thorium provide much of the heat that drives continental movement, perhaps other planets don't have the same heat engine inside them," he said.