News Staff
Electric vehicles are all the rage for wealthy elites but they have a more practical future benefit - mass transit, assuming the electricity source is low-emission like nuclear or solar.

Right now, things like electric buses require more cost because of the maintenance and downtime. They take huge batteries, which means when those die off and they are placed into landfills we will replace global warming with acid rain. And to match gasoline's energy density would take a battery larger than could fit on a bus.

The solution instead has to be much faster charging times.

Working with several partners in the EDDA Bus project, Fraunhofer scientists have developed a solution that permits fast, uncomplicated recharging. EDDA Bus is part of the Fast Charging Systems for Electric Buses in Public Transport joint research project funded by the German Federal Ministry of Education and Research (BMBF). The solution is based on four core technologies: the Dresden-based company M&P GmbH designed a charging station with very high charging capacities; HOPPECKE Advanced Battery Technology GmbH supplied special batteries designed for such high power capacities; Vossloh Kiepe GmbH was responsible for adapting the power electronics; and finally, the heart of the development work is the contact system located on the roof of the bus, which was realized by Fraunhofer IVI together with Schunk Bahn- und Industrietechnik GmbH. 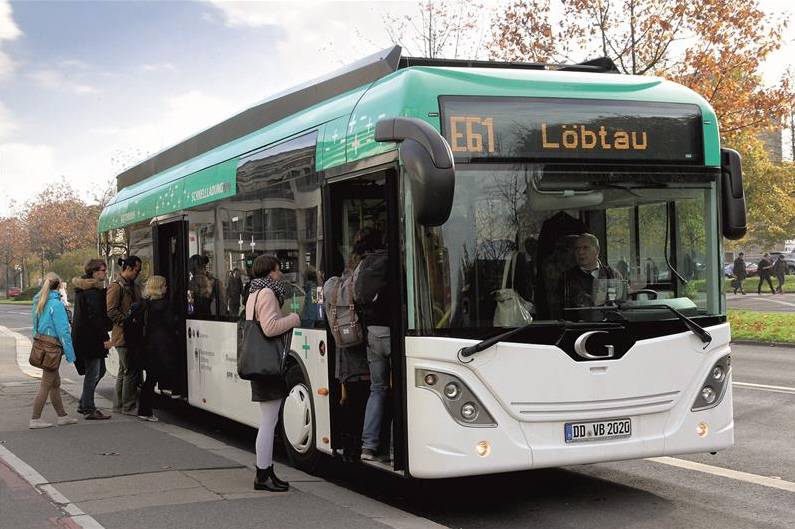 For the contact head, six powerful contacts were housed in a small installation space. There are two contact poles – one positive, one negative – on each side. Fitted to the top, there is an earth contact and a control pilot, which monitors the earthing. “This means our system meets the most stringent safety requirements,” explains Dr. Thoralf Knote from the Fraunhofer Institute for Transportation and Infrastructure Systems IVI. Schunk Bahn- und Industrietechnik GmbH developed heat-stable components for the contact system. This was necessary because, in contrast to streetcars for instance, where energy is transferred while the vehicle is moving, transferring power to a stationary vehicle generates high local temperatures that would damage conventional components.

EDDA Bus passed its first practice assignments in regular service in Dresden with flying colors. Following the test phase, the vehicle served a more challenging route of around 20 kilometers in length and containing several hills. “Once again in this second phase, the results have exceeded our expectations,” says a delighted Knote. The average energy consumption is 1.19 kWh per kilometer – it should be noted here, however, that the bus is not heated electrically, but using engine-independent diesel heating. Recharging takes less than 6.5 minutes.
News Articles
More Articles All Articles
About