Flowering dogwood (Cornus florida), kousa dogwood (Cornus kousa) and various genetically modified relatives are the most popular and economically significant members of the genus Cornus in the nursery and landscape industries. These deciduous trees are highly valued for their spring display of pink, red, or white bracts, brilliant red fall foliage, and exfoliating bark and in the US sales of dogwoods account for more than $30 million dollars each year.

"We have found that Cornus kousa is more tolerant to anthracnose and powdery mildew than Cornus florida," explained Phillip Wadl, lead author of a new report published in HortScience. "Hybrids between these two species are generally more vigorous than typical plants of either parent species, and have resistance or tolerance to dogwood anthracnose and powdery mildew." 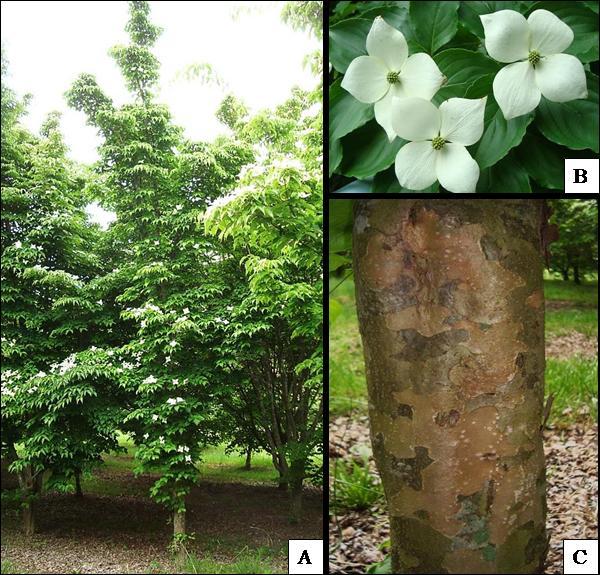 'Empire', one of the new dogwoods created by science, is shown in the photo at 20 years old. 'Empire' features brilliant white bracts and exfoliated bark. Credit: Phillip Wadl

Wadl and colleagues Mark Windham, Richard Evans, and Robert Trigiano evaluated 400 seedlings of C. kousa for disease resistance and traits such as color, degree of overlap, size of bracts, tree form, and bark and leaf characteristics. The scientists selected three cultivars they named 'Empire', 'Pam's Mountain Bouquet' and 'Red Steeple' for development and eventual release. 'Empire' is a brilliant, white-bracted kousa dogwood that has a columnar form and exfoliating bark.

The authors noted that dogwood anthracnose and powdery mildew were not observed on any of these trees. Analyses showed that 'Empire', 'Pam's Mountain Bouquet', and 'Red Steeple' are genetically distinct from the 26 cultivars and unnamed accessions of Cornus kousa that are maintained in the University of Tennessee's kousa dogwood collection.

The program has applied for a plant patent for 'Pam's Mountain Bouquet'. A limited quantity of budwood has been distributed to wholesale nurseries in Tennessee and Japan, and selected nurseries have been identified to propagate the cultivars.

It is expected that groups like Union of Concerned Scientists and Greenpeace will object to these Frankenstein varietals because they are not free of charge and are therefore perpetuate Big Horticulture monopolistic practices. Plus, no one can be absolutely certain that dogwood anthracnose and powdery mildew won't mutate and turn the planet into World War Z.