News Staff
Not all exoplanets are going to be habitable, many will be just the opposite. Astronomers have measured the temperature of the atmosphere of an exoplanet with unequaled precision and determined we won't be vacationing there any time soon. By crossing two approaches, using the HARPS spectrometer and a new way of interpreting sodium lines, researchers have been able to conclude that exoplanet HD 189733b is showing infernal atmospheric conditions, with wind speeds of more than 1,000 kilometers per hour and a temperature 3,000 degrees.

With a temperature that hot and winds blowing that fast, the HD 189733b exoplanet’s atmosphere is truly turbulent. Measurements taken by a team of astronomers from the Universities of Geneva and Bern are given in the framework of the PlanetS NCCR; the figures come from observations made over sodium spectral lines. This element is contained in the exoplanet’s atmosphere, and has been measured by the HARPS spectrometer, an instrument designed at the UNIGE Observatory, and installed on a telescope of the European Star Observatory (ESO) in Chile. 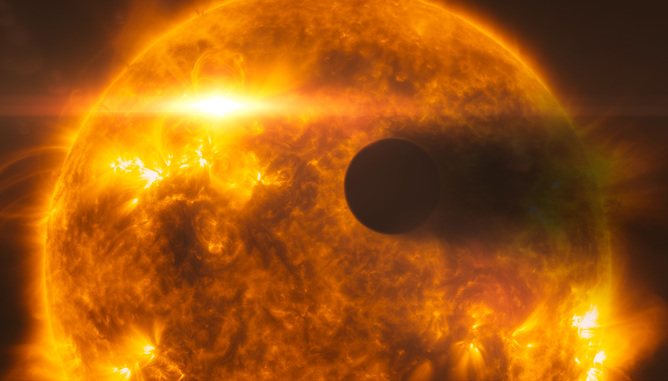 When there is an atmosphere, sodium is the source of a clearly recognizable signal, whose intensity varies at the time when the planet passes before its star, an event called transit. This effect had been predicted in 2000, and highlighted two years later through Hubble space telescope observations. But, it had only been able to be detected since then from Earth, from giant telescopes, 8 to 10 meters in diameter.

At UNIGE, astronomers have had the idea of using observations already made by the HARPS spectrometer, to study sodium lines. By attentively scrutinising the data collected over many years, Aurélien Wyttenbach, a researcher at the UNIGE Faculty of Science, has been able to detect variations in sodium lines during several transits of HD 189733b. Surprisingly, the analysis of HARPS data on Earth produces an equivalent detection, in terms of sensitivity, to that of the Hubble space telescope, but much better in terms of spectral resolution. It is this last aspect which has enabled an analysis to be achieved, which is a lot finer than previously, and this despite a telescope whose diameter remains modest.

Alongside this, and in another study, Professor Kevin Heng, at Bern University, has developed a new technique of interpreting variations in sodium lines. Instead of using a sophisticated computer model, he resorts to a set of simple formulae, which enable variations in temperature, density and pressure to be expressed within an atmosphere.

These two studies consequently open up the path of exploring exoplanet atmospheres with tools that are more accessible than giant or space telescopes.